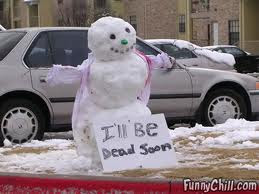 Snow is not the most stable of artistic materials and even if it survives a thaw, there is always the risk that it may get stolen…

There’s been a lot of commentary recently about the stolen snowman of Kent. Most of this commentary has criticised/ridiculed the woman for reporting such a trivial event. However, little thought has been given to the rights which were stolen along with the snow, pound coins (eyes) and teaspoons (arms) which constituted the snowman in question. Was there a more sinister force at work? Why was the snowman taken in its entirety, rather than just the coins and teaspoons, were the thieves in fact after the snowman as a sculpture?

For it was not just the snowman that was stolen but also the potential to exploit the artistic and moral rights in the snowman. Despite the apparent lack of originality, the snowman may well have attracted copyright protection as a sculpture. As it is an artistic work, there is no requirement for recording in order for copyright to protect the work.

The creator does not appear to have exercised her right to object to derogatory treatment of the work and in most reports she has not even been identified as the sculptor. Although there is little that can be achieved in such circumstances

Some doubters have suggested that the snowman melted. But the evidence refutes such a simple explanation. The phone call clearly demonstrates that there was still ice on the road and no suggestion of a thaw. Further the call clearly indicated that someone had stolen the snowman in its entirety rather than simply the pound coins and teaspoons which were arguably the elements of the snowman with the greatest short term resale value.

As the caller commented:

"It ain't a nice road but you don't expect someone to nick your snowman."

Sadly, the police did not take the case seriously at the time and as the snow has mostly melted the trail of the snowman (and most probably the snowman itself) has gone cold. This is one art theft that is destined to remain a mystery.
Posted by Rosie Burbidge at 09:00:00