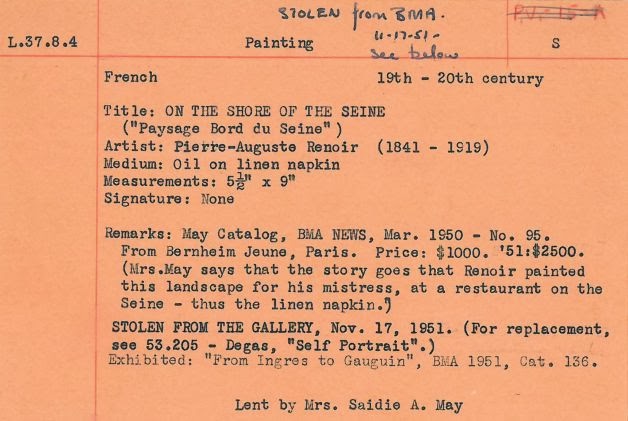 In 1937, Saidie May, widow of an art collector, loaned "Paysage Bord du Seine," a painting by Pierre-Auguste Renoir to the Baltimore Museum of Art (BMA).  The BMA exhibited the piece twice, and during the 1951 show "From Ingres to Gauguin," the painting was stolen from a BMA gallery.  The BMA filed a police report and investigation ensued, but the painting was never found.  The painting's owner, Saidie May, died and bequeathed the painting, along with the rest of her art collection, to the BMA that same year.

Around 2009 the painting was purchased at a West Virginia flea market by Marcia Fuqua, in a box of miscellaneous items, for $7.  Fuqua maintains she was unaware that the piece was a genuine Renoir although there was a Renoir nameplate on the frame and materials on the back indicating as much. However, after learning the piece might be valuable, she brought it to a local auction house for valuation in 2012.  The painting's estimated worth was $75,000-$100,000 USD.  Despite the uncertain provenance the piece was scheduled to be auctioned, and just days before the auction the BMA located internal documents showing that the piece had been stolen from it. The FBI then seized the painting and held possession of it until the rightful owner was determined.

In 2013, the U.S. District Court for the Eastern District of Virginia was asked via an action filed by the U.S. federal government (as the FBI was still holding the painting) to resolve who among Fuqua, the BMA, the insurer that had paid on the original loss of the painting, and the heirs of Saidie May and her husband, rightfully owned the painting.  Having narrowed it down to just Fuqua and the BMA, the court ruled in favor of the BMA earlier this month.

The BMA's clear records of the painting's theft were instrumental in showing that the piece was not merely misplaced or that it had some other fate that would have allowed title to pass to subsequent possessors. These records make this case distinguishable from similar detinue actions where stolen items were located but the institutions had not reported the loss due to embarrassment, creating a much steeper evidentiary burden for seeking return of the work.

Just before Christmas, Arts Council England announced that a second artwork has been donated to the nation under the Cultural Gifts Scheme.

Only launched in March 2013, the scheme is intended to encourage lifetime gifts of cultural and art objects to the nation. It is effectively a sister arrangement to the better-known Acceptance in Lieu scheme, which encourages similar gifts on death. Both offer tax breaks (although in respect of different taxes) in exchange for such donations.

The new gift is an early Vincent Van Gogh painting entitled Head of a Peasant Woman. Now on display in the National Gallery, it is an important addition to the collection, being the gallery’s earliest work by the painter as well as its only Van Gogh figure painting (the other six being landscape and still life works).

The scheme is applicable to objects which are deemed “pre-eminent” in terms of their national, scientific, historic or artistic interest. Where an individual or a company owns such a pre-eminent object, they can choose donate it to the nation in return for a reduction in their UK tax liabilities. The amount of the reduction is based on a set percentage of the value of the object donated, and that percentage differs depending on whether the donor is an individual or a company; for an individual, the maximum reduction is 30% of the value of the donated object, while for a company it is 20%.

Following allegations that a piece of Chinese calligraphy sold at auction in New York in September 2013 is a fake, Sotheby's have been compelled to issue a statement insisting that the artwork in question is genuine.


An ancient Chinese scroll, which went under the hammer for $8.2 million at an art auction in New York, has become the focus of an intense debate between the auction house that sold it, the wealthy collector who bought it, and a trio of museum experts who have denounced it as a fake. 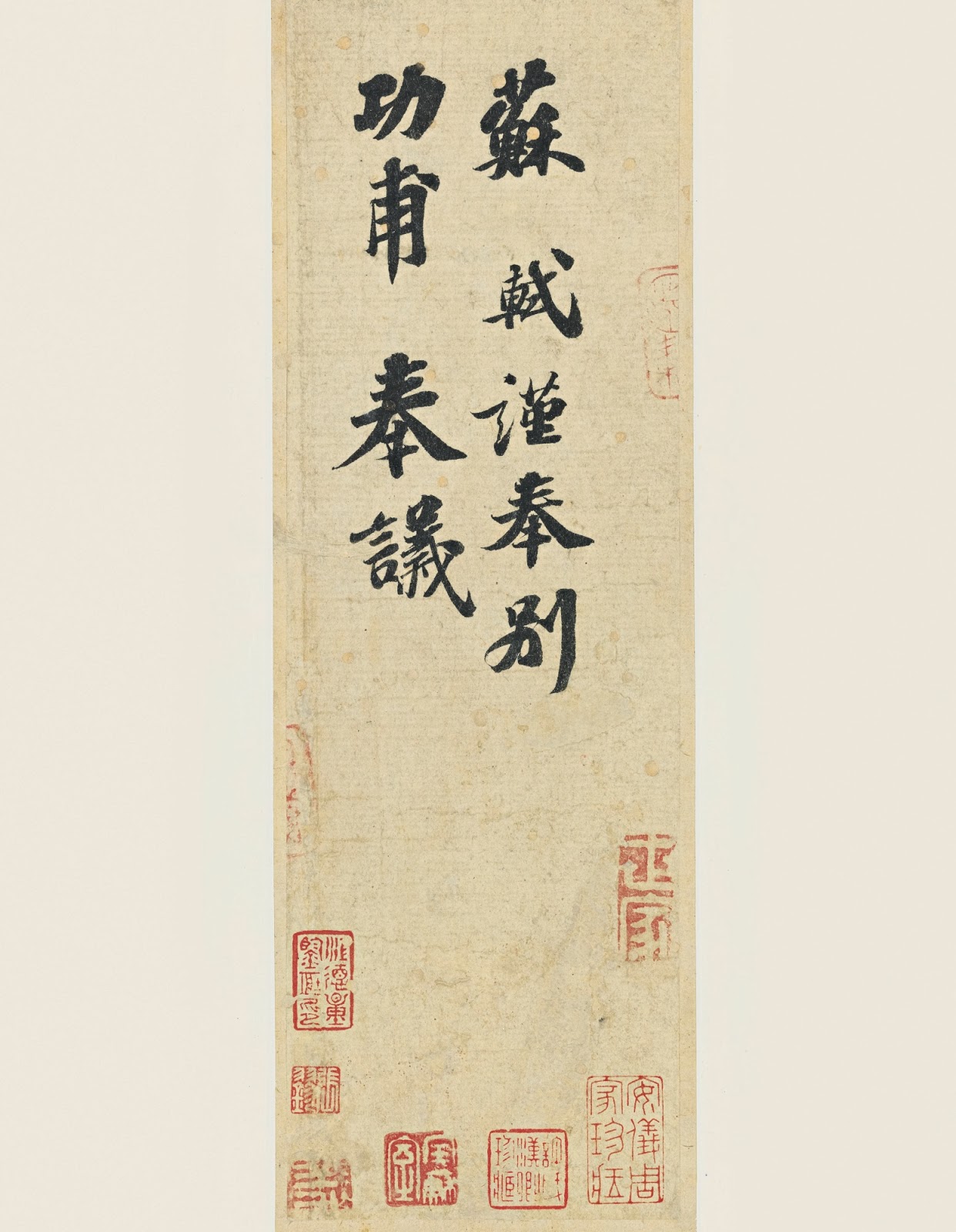 The public spat began Saturday when three art experts from the Shanghai Museum alleged that the calligraphy work, titled “Gong Fu Tie,” [pictured above] was a forgery. Purchased at a Sotheby’s auction in September by collector Liu Yiqian, the piece is attributed to the Song Dynasty poet Su Shi, who lived from 1037 to 1101 and is known by the literary name Su Dongpo.

The three specialists scrutinized the work in the Xinmin Evening News, a state-owned newspaper based in Shanghai. They added that they plan to release a research paper giving more details about why they believe the piece to be a counterfeit.

Last week, the three experts published their findings in the China Cultural Relics News. They maintain that the calligraphy is a forgery produced using a special technique from the late Qing Dynasty. In response, Sotheby's insisted that the piece is genuine, and have said that their experts will also provide a more detailed response within 10 days.

This very public debate over the authenticity of an artwork sold at auction to a private collector is quite unusual. It seems particularly rare for a major museum to stand up to such a big auction house. However, it remains to be seen whether the intervention will have any effect on a sale that has already taken place.

Tax exempt artworks: a "racket in urgent need of reform"?

“A little known art and heritage tax exemption scheme designed to allow the British public access to a treasure trove of privately owned works has been described as a racket in urgent need of reform,” the Guardian has reported.

The “racket” in question is the “conditional exemption” scheme, which allows owners of certain cultural objects (those designated as being pre-eminent for their national, scientific, historic or artistic interest) exemption from inheritance and capital gains tax, so long as they abide by three conditions. Broadly, those conditions are to keep the object in the UK, to keep it in good physical condition, and (most controversially) to allow the public access to that object.


The scheme’s aim is to ensure that a person inheriting such an object isn’t forced to sell it – possibly to a non-UK buyer – in order to pay the inheritance tax bill. It allows the individual to keep the object and gives the nation access to it at the same time, so everybody is meant to win.

But the Guardian writes that the scheme is “patchy at best”. Its research suggests that, in practice, gaining access to these objects can be tricky due to their existence being listed only in a “rarely publicised database” (to access the database click here) and due to owners who may demand identification prior to allowing viewings, offer inconvenient viewing dates, or simply fail to respond to viewing requests at all. In addition, the Guardian notes that the scheme has cost the UK “more than £1bn” in forgone tax over the past few decades.

“The scheme is not working,” shadow culture minister Helen Goodman is quoted as saying, with access obligations being “incredibly small” at “no more than 28 days per year”. She also believes that “there should be a requirement to lend works to public museums and galleries”.

However, the article doesn’t mention that 28 days’ access is normally a minimum (rather than a standard) condition, and - despite Goodman's comments that owners deliberately arrange awkward viewing times to keep visitors away - access during those days must be without the need for an appointment (although exemptions granted prior to1998 may still provide for access by prior appointment only).

Nor does it mention that in most cases HMRC already requires “willingness to make loans to public collections”, or that owners who fail to stick to the conditions are liable to lose the their exemption and pay their tax bill. (Contact details to alert HMRC about difficulties accessing objects can be found here.)

The Guardian’s investigation shows that the scheme is by no means a perfect system, and some may argue that taxpayers’ funds could be more efficiently employed. But the scheme does at least provide opportunities for owners to retain their important art or cultural objects while offering some degree of public access, as an alternative to such objects passing into the entirely private hands, whether in the UK or abroad, of those who can afford to buy them. And those rights of public access are rather broader than Goodman appears to think.
Posted by Elizabeth at 17:52:00 No comments: