A question of fraud

A new report of art fraud, this time in Portugal, where last month a police raid uncovered almost 130 fake paintings together with forged certificates of authenticity.

The paintings were claimed to have been painted by some huge name artists including; Chagall, Kandinsky, Matisse, Miro, Modigliani, Monet Picasso, Munch and Toulouse-Lautrec. However, rather than direct copies of known works from these artists, the forgeries consisted mostly of paintings in the style of the artists.

The Portuguese police are said to have set up a special investigation into the case, due to the wide range of artists whose works have been faked and the specialist knowledge that would have thus been required. Indeed, there were also forgeries recovered for the works of Leonardo da Vinci, which would have required extremely specialist knowledge of how to artificially age pictures as well as artistic skill. Further, such was the skill involved that according to some experts who have seen the forged paintings, they could have been sold for sums in the millions to unsuspecting buyers.

A Norwegian woman is under investigation in connection with the investigation and her husband is being sought by the Portuguese police.

However, given the scale of the works and the variation in artists' styles which have been reproduced in the forged paintings, it is doubted that one forger could have produced all the works.

It remains to be seen whether the investigation bears any fruit.

What is interesting from an strictly academic legal point of view is that fact that a large number of the forgeries were not copies, but paintings in the style of the artists. Would this amount to copyright infringement? Or could it be argued that the paintings were therefore copyright works in their own right, in which sufficient original skill and labour had been invested? Obviously, if the paintings were being passed off as authentic, copyright is not a defence to fraud. But if those artists were alive today, whether they had a copyright claim against the forgers would require a close examination as to whether the copyright in an artwork can be infringed by another work which merely imitates the style of the first work.

Which are the true works? 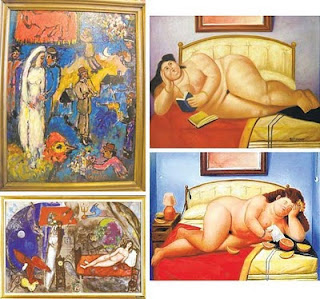