From one controversial artist to another – news that Banksy is to donate the proceeds from the sales of his “Choose Your Weapon” prints to support the Russian art collective “Voina,” a radical Russian performance group known for their provocative and politically charged works of performance art.

A performance in September, known as “Palace Revolution”, which involved a team of 31 activists overturning police cars in St. Petersburg, has led to the arrest of two of Voina's members. The two are now are now awaiting trial, charged with "hooliganism, carried out on motives of political or ideological hatred or animosity towards a social group," and facing a prison sentence.

It remains to be seen whether Banksy's aid assists his fellow artists in freeing the two member of the collective. 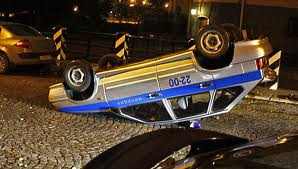