Despite this bad news, as we have previously noted here and here, there are a number of other organisations dedicated to locating and returning lost and/or looted art to its rightful owners.

One such organisation is the Commission for Art Recovery, which was established in 1997 to assist efforts to restitute art that was seized, confiscated, or wrongfully taken as a result of the policies of the Third Reich. The Commission deals with governments, museums, and other institutions internationally to encourage and help museums and governments to research, identify and publicise works in their possession that may have been stolen during the years of the Third Reich in order to facilitate the return of these works to their rightful owners.

Another is the Lost Art Database which is run by the Koordinierungsstelle Magdeburg - Germany’s central office for the documentation of lost cultural property. This database was set up jointly by the Government and the Länder of the Federal Republic of Germany, and registers cultural objects which as a result of persecution under the Nazi dictatorship and the Second World War were relocated, moved or seized, especially from Jewish owners.

The database is divided into two areas. In one section, it is possible to possible to register cultural objects which were lost by public institutions or private individuals and institutions as a result of Nazi rule and the Second World War, and to request a world-wide search via the Lost Art Internet Database. Conversely, owners or custodians of cultural objects, who are uncertain as to the provenance of those objects can search to determine whether the objects have been sought elsewhere. On the other side, it is also possible to register cultural objects, where it is known that they were taken illegally from their owners or relocated to another place as a result of the war. This part of the database also contains reports on cultural items with an uncertain or incomplete provenance, which suggests the possibility of illegal dispossession or a removal and relocation due to the war. Institutions and individuals who have suffered such a loss can then search whether the cultural objects they are looking for are contained in the list of found objects.

It is reported that with the use of this database, among other things, the reclamation of works lost during the Second World War has recently increased. Indeed, the Berlin State Museums reports that they have recovered more works in the past decade than in the previous several decades. 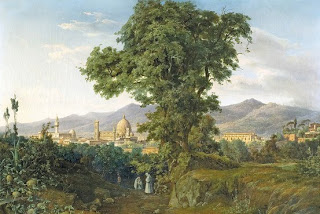 This is reflected in a current exhibition in Berlin's Alte Nationalgalerie entitled “Loss and Return”, which documents Berlin's most recent attempts to recover works lost during World War II, and which displays a number of works which were lost but have been recovered. One such work is August Wilhelm Ahlborn's "View of Florence" which disappeared during the war after it was loaned by Berlin's National Gallery to the Nazis in 1934 to decorate the Reich Chancellery. This painting, which for decades was thought to be lost for good, appeared out of nowhere in 2009 when a Berlin auction house offered it for sale.

Such stories inspire hope that other artworks, which have been given up as lost or destroyed, or which were sold without the artists' knowledge and promptly disappeared, remain to be discovered and reclaimed by their rightful owners