Art and Artifice event: save the date!

On 24 October we're having an Art & Artifice get-together. The location will be in Central London and our guest speaker will be Michael Edenborough QC, who acted for the successful claimant in the celebrated Red Bus case (here,  noted on this weblog by Rosie here). Michael will be speaking about this case -- which still has the power to shock and surprise people -- and its aftermath, following which a panel of enthusiasts, including some members of the Art & Artifice blog team, will make some pertinent comments of their own.  Refreshments and a spot of pleasant networking will then spontaneously occur.  Further details will be provided once they are finalised.  In the meantime, save the date, and indeed the time (registration at 5 pm; event starts at 5.30 pm and ends at 7 pm).

Email ThisBlogThis!Share to TwitterShare to FacebookShare to Pinterest
Labels: Event

By way of update to Detroit's financial woes, reported here, many will have heard that the city has now filed for bankruptcy.

The Detroit Institute of Arts, nevertheless, remains at the centre of the debate as to how the city could reduce its debt.

The Art Newspaper reports that "At some point in the past two months, Christie’s auction house sent two employees to Detroit to assess DIA’s collection...The auction house did not show up uninvited, according to a source familiar with the situation, but it is unclear who requested Christie’s services."

It is still unclear, however, whether the city is entitled to use the art collection in this way. The Art Newspaper explains the situation:


"Unlike most museums, DIA’s collection and facilities are owned by the city, which makes them vulnerable to creditors if Detroit successfully files for bankruptcy...But according to many museum advocates, as well as the Michigan state attorney general Bill Schuette, the collection is not a traditional asset because it is held in a charitable trust for the people of Michigan. The city, according to a formal opinion issued by Schuette on 13 June, is “limited to using the assets for the designated purpose of [the] trust” — in this case, the acquisition of art.

Whether the attorney general’s opinion amounts to state law is open to interpretation and could be subject to a legal fight...A bill to protect the collection, passed by the state Senate on 11 June, currently awaits a vote in the House of Representatives."

Thus, it remains a case of wait and see.

As an update to my post on the potential destruction of the paintings from the Kunsthal gallery in Rotterdam, I have been alerted to an interesting post on The 1709 Blog looking at whether the law provides any remedy to such acts. The post, composed by Mira T. Sundara Rajan, can be found here.
Posted by Simone at 19:48:00 No comments:

Last October, thieves broke into the Kunsthal gallery in Rotterdam and stole seven extremely valuable paintings off the walls.

The thieves took the following works:

It now, horrifyingly, appears that these works of art may have been burnt in an attempt to destroy the evidence of the crime.

By way of background, three Romanians were arrested in January 2013 on suspicion of having stolen the paintings, however these were not found. Subsequently, Olga Dogaru, the mother of one of those charged with stealing the paintings, claimed that she had buried the paintings in an abandoned house, but later dug up the art and burned them after police began searching the village for the stolen works.

The Associated Press now reports that forensic experts have determined that ash from Dogaru's oven contained "'small fragments of painting primer, the remains of canvas, the remains of paint' and copper and steel nails, some of which pre-dated the 20th century." But that "Ernest Oberlander-Tarnoveanu, director of Romania's National History Museum...refused to say definitively that the ashes were from the stolen paintings. He said justice officials would make that decision. He did venture, however, that if the remains were those of the paintings, it was 'a crime against humanity to destroy universal art'."

The Associated Press explains that the next step will be to compare the ashes to what was known about the missing paintings to determine if the remnants are consistent with the stolen works. Let's hope by some miracle that they are not.

Will Cariou v. Prince case be heard by the US Supreme Court?

We have extensively talked on this blog about Cariou v. Prince case.

Such decision was largely reversed in appeal last April, where it was ruled that 25 of 30 paintings from Prince's "Canal Zone" were sufficiently different from Cariou's ones to be qualified as fair use, as we reported here.

Last May, Cariou asked the Second Circuit of Appeal to reconsider the case, claiming that the ruling contradicted the earlier decisions by the same court, not providing any certainty on how to qualify fair use. But the Second Circuit denied his request on June 10.

Therefore, Patrick Cariou’s lawyer recently announced the photographer will file appeal with the Supreme Court within three months, i.e. within 90 days from the Second Circuit's refusal to rehear the case.

Assuming that Cariou will file the Appeal, then the Supreme Court will not necessarily agree to hear it. Indeed, though the Supreme Court receives thousands of requests per year, it agrees to decide on a small percentage (e.g. in 2010 it was only 1%).

Anyhow, a pronunciation from the US Supreme Court could be useful to provide clarity on what can constitute fair use. Indeed, the Second Circuit's decision was largely criticized for not offering sufficient criteria for applying fair use defense in appropriation art cases.
Posted by Angela at 15:03:00 2 comments:

Drive along Highway 90 in Texas today and you'll see a 40-foot high installation featuring a Playboy bunny and 1972 Dodge Charger towering over you. But don't wait too long, as the Texas Department of Transportation has ordered its removal within weeks.

The sculpture was commissioned by Playboy Enterprises and created by well-known artist Richard Phillips. Finished in mid-June, it wasn't long before the work attracted complaint. A resident Marfa, a Texan town near the site of the sculpture which is known for its arts community, reported the installation on the grounds that it was not art but unlicensed advertising. The department for transportation looked into the complaint and decided that since Playboy did not have a license for outdoor advertising, the installation had to go.

"A specific permit application for the sign was not submitted," said Veronica Bayer, the transport department's media relations director in Austin. "[We are] treating this case like any other when someone has placed an outdoor advertising display without an active license and permit".

Playboy however describes the sculpture as an art installation rather than advertising. It has issued a statement saying that it does not believe the sculpture "violates any laws, rules or regulations" and that it hopes to resolve the issue - presumably without the removal of the work.

The row raises the ever-interesting question: Where is the line between what is and is not "art" in the eyes of the law? If an artwork has the effect of raising a business's revenues or brand awareness (for example, Warhol's Campbell soup works) then does that artwork become advertising? Or if Phillips had created the sculpture without input from Playboy, would it have been an artwork for the purposes of the department for transportation?

Playboy has a few more weeks to convince the Texas authorities that while Phillips' giant bunny may be promoting the company, that doesn't make it an advert.
Posted by Elizabeth at 19:48:00 No comments: 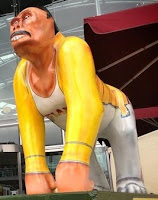 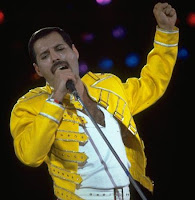 The ideal solution would have been for Freddie Mercury's estate to buy the gorilla by making a charity donation, which would have saved a lot of bad publicity and purchased some goodwill into the bargain.
Posted by Jeremy at 09:33:00 1 comment: