More bad news for those seeking to reclaim ownership of a number of artworks which were sold in dubious circumstances during the Second World War.

On 16 December 2010, the United States Court of Appeals, Second Circuit confirmed the decision of the South District Court of New York that the claim was time-barred.The case related to three works of German artist Georg Grosz, which were confiscated by the Nazis, and, by various routes, eventually ended up in the collection of the Museum of Modern Art in New York (MoMA). 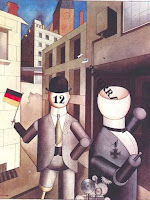 Grosz heirs brought the claim against MoMA following several years of unsuccessful negotiations between the parties. However, the claim was only filed more than three years after the Director of MoMA had sent a letter to Grosz's heir saying that the Museum had voted not to relinquish the art. Accordingly, as it was also decided in the case of Boston Museum of Fine Arts and the Kokoschka painting, the Court held that the action should be dismissed as it fell outside the Statute of Limitations.

See here for the decision of the Court of Appeals.

See here for the decision of the District Court.