Woman in Sombre Travelling Cloak Detained in the UK 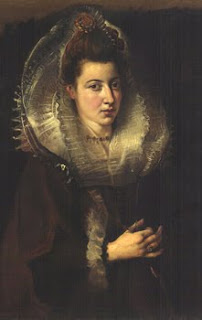 Culture Minister Ed Vaizey yesterday placed a temporary export bar on Portrait of a Young Woman, said to be by artist Peter Paul Rubens, providing a last chance to raise enough money to keep the painting in the United Kingdom. The Minister’s ruling follows a recommendation by the Reviewing Committee on the Export of Works of Art and Objects of Cultural Interest, administered by the Museums, Libraries and Archives Council (MLA). The Committee recommended that the export decision be deferred on the grounds that the painting is of outstanding aesthetic importance and of outstanding significance for the study of early 17th Century portraiture.


The Reviewing Committee on the Export of Works of Art and Objects of Cultural Interest is an independent body, serviced by MLA, which advises the Secretary of State for Culture, Media and Sport on whether a cultural object, intended for export, is of national importance under specified criteria. Where the Committee finds that an object meets one or more of the criteria, it will normally recommend that the decision on the export licence application should be deferred for a specified period. An offer may then be made from within the United Kingdom at or above the recommended price.
The painting, which dates from c. 1602-04, depicts a woman in a sombre travelling cloak, embellished with elaborate lacework and expensive jewellery. Her identity is unknown, but she was clearly an individual of high status. The costume itself is Spanish but does not necessarily locate the painting in Spain, since some Italian courts at that time adopted the Spanish style of dress. It is possible that the painting was commissioned by Vincenzo Gonzaga, Duke of Mantua, for his “Gallery of Beauties”. The woman gazes straight out of the canvas and there is a sense of a strong bond between viewer and sitter that gives the portrait a powerful impact.
Lord Inglewood, Chairman of the Reviewing Committee, said: “This is a striking portrait of a very real, although unidentified, woman. There are some bravura areas of painting, especially in the face and hand. It is an important work for study as although its attribution to Rubens is debated it is an outstanding example of portraiture in Southern Europe from the beginning of the 17th Century."
The decision on the export licence application for the painting will be deferred until 17th March 2011 and may be extended until 17 May 2011 inclusive if a serious intention to raise funds to purchase the painting at the recommended price of £1m is expressed. So if you have a spare £1m lying about, now is the time to make an offer.
Original Source: http://www.culture.gov.uk/news/media_releases/7719.aspx
Posted by Louise O'Callaghan at 15:43:00