Scratching the surface of London -- with stolen material 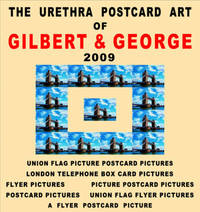 Whether you care for "The Urethra Postcard Art of Gilbert & George", the latest exhibition of work by that iconic British duo, there is much to excite the lawyer.  The works exhibited consist of collages made from postcards and stolen newspaper billboards. Regarding the latter


" ... one of the artists enters a newsagents' to purchase some chocolate, while the other pilfers that night's attention-grabbing headline outside. “We have been stealing the Evening Standard [bills] and other newspapers for the last six years,” George said.

It means they have titles for the next series of works even before these are created: including Arrested, Attack, Baby, Bomb, Caged, Gay and Murder. Gilbert said: “There is nothing pleasant. But that's not our fault. We are scratching the surface of London."”

While it is not apparent whether the postcards are also stolen, their reproduction in the book of the exhibition inevitably raises questions of copyright too.  Some of the postcards -- those which consist of sex advertisements which are becoming less ubiquitous now that public telephone boxes are giving way to handheld telephonic devices -- may not even be entitled to copyright  protection in the fullest sense, if British courts revert to old case law on the subject which has never been formally overruled.

Would a court grant equitable relief to protect from copyright infringement (or any other wrong) a piece of artwork which consisted of stolen material, we wonder.