Questions have been raised as to the artistic value of an art exhibition currently showing at GV Art in Marylebone.
“BRAIN STORM - investigating the brain through art & science” is described as an “exhibition in which seven contemporary artists consider the human brain: the physical entity described by science, the seat of the mind and soul, and origin of the creative impulse”. The press release further explains that:

“Their works are shown alongside a film of a Neuropathologist performing a "brain cut up." For the viewer, this juxtaposition is the starting point for a dialogue between how we see the brain and understand its functions scientifically and what happens when this physical organ that produces our individual visual and creative understanding becomes the subject for the artist.”
“The inspiration for Brainstorm was an invitation earlier this year by Dr David Dexter, Reader in Neuropharmacology and Scientific Director Parkinson’s UK Tissue Bank, Centre for Neuroscience, Imperial College, London, for GV Art to observe a brain cut up. And, on 17 November, curator Robert Devcic and artists Katharine Dowson and David Marron spent more than two hours observing a braincut up at the Joint MS Society and Parkinson’s UK Tissue Bank at Imperial College, London. Some of the works in this exhibition were made in direct response to this experience.”
“The gallery hopes to have the actual brain and brain slices involved at that event on display in coming weeks. GV Art is the only private gallery in the country to hold a Human Tissue Authority Licence for Public Display and Storage”

Of course, it is on this last point that issues have arisen. For today, the brain, which was removed from the dead body of a multiple sclerosis sufferer (with the patient's consent), went on show. 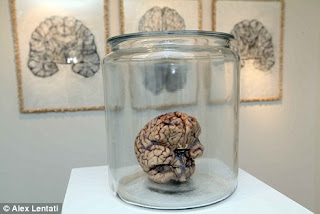 It is reported that there have been protests over the work, with critics saying that the exhibit pushes the boundaries of decency in the name of art and that the public display of human body parts is “degrading”. In this respect, however, the only opponent cited is a Conservative MP, David Amess, who is a former member of the health select committee, who stated: “It's one thing if this is done in a laboratory, but it's degrading to put body parts on display in a public place. In my personal opinion, this is a disrespectful way to treat the human body and is unacceptable.”
It is not the first time that parts of a human body have gone on show in the name of art. This is not to say that there are not strict rules governing the public display or storage of any human tissue from a dead person.
The Human Tissue Act (“Act”), which came into force on the 1st September 2006 and is governed by the Human Tissue Authority (“HTA”), provides a framework for the regulation of storage and use of human tissue from the living, and the removal, storage and use of tissue and organs from the deceased for specified purposes. At the heart of the Act is the requirement that consent be obtained for the removal, storage and use of any relevant material which has come from a human body for certain Scheduled Purposes. These purposes include public display. The Act does not define 'public display', but the HTA Guidance provides that it will regard a public display as: “An exhibition, show or display in which a body of a deceased person or relevant material which has come from the body of a deceased person is used for the purpose of being exposed to view by the public.”
A key principle on which the Act is based is that all human bodies, body parts and tissue within the Act’s scope should be treated with appropriate respect and dignity. This principle applies to the public display of a body or tissue from a deceased person, and the guidance’s proposals complement those within the European Union Tissues and Cells Directive (EUTCD). The Act is also complemented by DCMS' Guidance for the care of Human Remains in Museums, which deals with the curating, care and use of human remains and rests on the same principle. In order to regulate this principle, the Act also makes it a requirement that all organisations that either use or store human tissue must be licensed to carry out specific activities. The HTA is responsible for issuing the licences.
As we have seen, GV Art holds one such licence. Accordingly, it may be inferred that that this exhibition does not fall foul of the requirements of the Act and that it has been concluded that the brain is being treated with sufficient dignity and respect.
Whether or not it is Art is another question. But, regardless of the answer to that, the exhibition certainly sounds fascinating.
It is currently showing at GV Art until 22 January 2011.
Source: The Evening Standard, 11 January 2011
Image Source: © Alex Lentati
Posted by Simone at 21:24:00

To me, it's the emperor's new, or old, brain. Is it not Gunther von Hagens all over again? Not one to visit before lunch or dinner, a propos of which, my grandfather used to eat brawn on toast. Yuck.