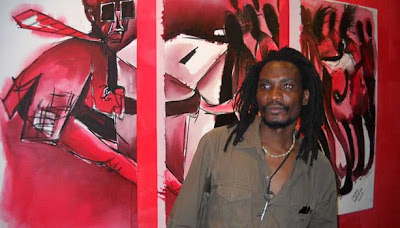 In March 2009, Zimbabwean artist Owen Maseko had an exhibition at the National Gallery in Bulawayo. Many artists are nervous before their works are shown to the public but Maseko had more reason to be anxious than most. His work was an outspoken critique of the 1980s period known as the Gukurahundi, when forces associated with Mugabe committed widespread atrocities. According to ArtInfo, the authorities shut the exhibition down the following day on the basis that it would provoke inter-tribal strife. Furthermore, both Maseko and Voti Thebi, the gallery’s Director, were taken to prison in leg shackles.

According to the Web site of Sokwanele, an underground pro-democracy movement in Zimbabwe, Maseko was initially charged with violating a prohibition on anything that "insults or undermines the authority of the President," as well as "causing offense to persons of a particular race, religion, etc." Under Zimbabwean law, these charges warrant a fine or a prison sentence of up to a year. However, the Government later attempted to substitute the charges with “violating a ban on publishing or communicating false statements prejudicial to the State." This offence carries up to 20 years of prison time.

Maseko's lawyer successfully argued against this greater sentence, however, Maseko’s art remains banned, and the art from his exhibition is still retained by the authorities as potential evidence against him. 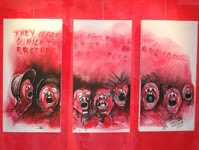 Maseko's Gukurahundi exhibition includes graffiti and installation elements as well as paintings. Slogans scrawled on the walls proclaim such sentiments as "A weak community is a politically compliant one," and "Patterns of resilience and support need to be facilitated...." The show also included several dummies strewn around the space, apparently representing victims of the atrocities. The paintings depict faceless silhouettes many of whom are fleeing in terror. In amongst all this fear threads the sinister caricature of a figure in over-sized glasses: Mugabe. 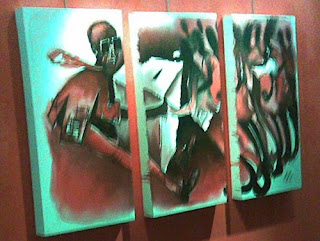 Maseko's personal website explained his philosophy as an artist: "Being an artist is about being brave and using art to challenge attitudes … People in Zimbabwe are waiting for change, but we as Zimbabweans are the change." He has been and continues to be extremely brave. It is now up to us to view and understand his art and not allow it to be swept under the carpet.

Art Info has an online gallery of seven photos from the exhibition which is available here: and there is a wider gallery of photos on Flickr.

Sources: Art Info and Sokwanele
Posted by Rosie Burbidge at 16:11:00

Congratulations on this post. Absolutely true. Artists of the world - support Owen Maskeo!!!

We in Tasmania hear his voice, see his compelling art-work. Free Owen Maskeo!

The Maltz Museum has been buying-up artworks of Marc Breed's and destroying them.
-UPI Newswire