Another painting which was seized by the Nazis during World War II [an unfortunately very familiar scenario] has been returned to Poland [a not-so-usual result]. 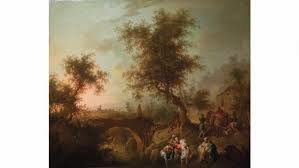 After almost 6 years of investigations, the US Immigration Customs and Enforcement's Homeland Security Investigations (HSI) announced the return of "Saint Philip Baptizing a Servant of Queen Kandaki" by German artist Johann Conrad Seekatz on 6 February 2014. On the same day, a ceremony was held to officially hand the paining back to Poland.


In June 2008, HSI New York special agents were notified by the Consulate General of the Republic of Poland that several national treasures of their cultural heritage looted during World War II were being offered for sale in the United States.

HSI New York agents met with Polish officials who provided supporting documentation to assist in the identification and recovery of the looted Polish work of art. HSI agents initiated an investigation and identified that the painting came into the possession of Doyle New York Auctioneers and Appraisers in about October 2006 and was sold under its erroneous name for approximately $24,000 to Rafael Valls Gallery in London.

An expert from the National Museum in Warsaw, delegated by the Polish Ministry of Culture and National Heritage, examined the painting in London with the full cooperation of the Rafael Valls Gallery and it was determined to be the same painting that was looted from Warsaw in 1944. In April 2012, HSI received an evaluation of the painting from the Ministry that the painting was identified as its true name and artist...

On July 12, 2012, after learning the painting was stolen, it was seized by HSI agents from the London gallery by stipulation order with the assistance of the US Attorney’s Office for the Southern District of New York (SDNY). The painting was returned to New York from London leading to the Feb. 6 repatriation to the Republic of Poland.br />

Three other looted artworks were previously returned to Poland in 2010 and 2011. It remains to be seen if there will be others.

The Polish Ministry of Culture and National Heritage runs an on-line database which details the country's wartime losses. There are thousands of artworks which are still missing.