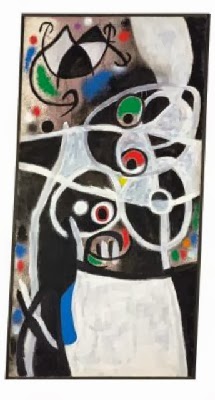 In a similar situation to that Detroit (reported here and here), but on a larger scale, the Portuguese government sought to sell 85 works by Spanish surrealist Joan Miró in a bid to cut its debt.

Portugal hired Christie's (who was called in by the Detroit Institute of Arts to value its works) to sell the pieces.

The decision to sell the art drew widespread criticism, and a case was filed in Lisbon to prevent the sale. Although, the court ruled against the claimants, this week Christie's withdrew the artworks from its auctions.


The auctioneers withdrew [the artworks] from a London sale even though a Lisbon court threw out a suit by opposition lawmakers, prosecutors and the public trying to block the offer saying the government had violated the rules on classifying the artwork.

The Miro collection, estimated at more than 35 million euros ($47 million), came into state hands in 2008 when Portugal nationalized the failed bank BPN that owned them.

"The legal uncertainties created by this ongoing dispute mean that we are not able to safely offer the works for sale," Christie's said only hours before the two-day sale was to start.

The paintings are being offered by the state holding company Parvalorem, which is in charge of minimizing the impact of BPN's old debts and bad loans on public accounts.

The court ruled the sale could not be stopped but noted that the state culture secretary's decision had not sought proper authorization to send the paintings to London last week.


The pieces remain at Christie's in London for now. We will have to wait and see whether they are returned to Portugal.