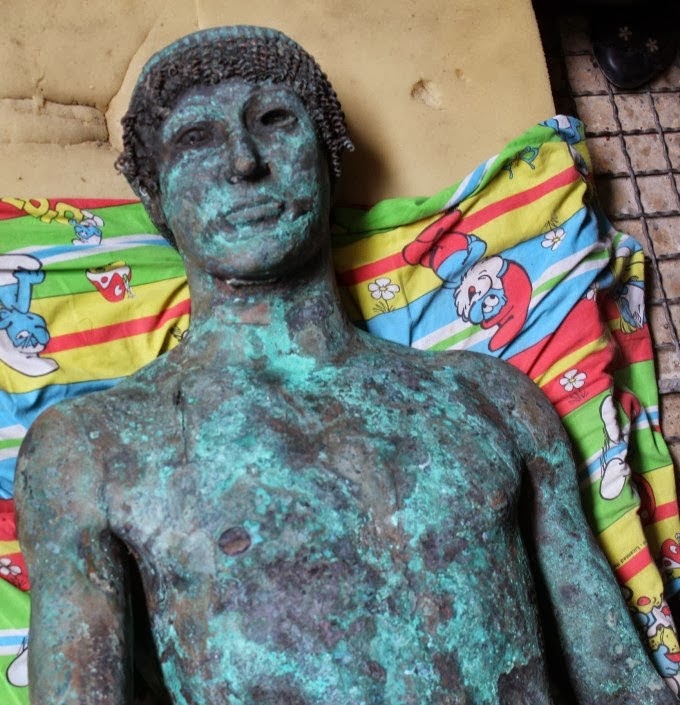 An extremely rare bronze sculpture of Apollo has been seized in Gaza. According to a report by the Guardian, the sculpture was found by a local fisherman about 100 yards off shore last August. The fisherman was unaware of the value of the piece and brought it home on a donkey cart. Eventually, after other family members took control, the piece turned up on eBay with an asking price of $500,000 and requiring that the buyer pick the piece up in Gaza.  However, $500,000 is considered far below the actual estimated value of the piece, which some are calling priceless. The eBay listing was quickly removed when the piece was seized by police from the Islamist group, Hamas, pending an investigation.

The Apollo statue is estimated to be over 2000 years old and is considered highly unique because it is a bronze cast, which is an unusual materials choice for a statue of that time.  Archeologists have yet to examine the piece, having only seen photos like the one above.  The statue will not make any further public appearances until the investigation is resolved.

Some debate whether the piece was actually found in the sea due to its clean condition and speculate that the piece was found on land.  This theory continues that the finder did not disclose the location in an attempt to circumvent ownership issues.  Either way there is speculation that the piece likely signals the existence of a far more extensive treasure trove, such as a buried temple.

Located on land, or at sea, this find presents legal issues that may be difficult to resolve, especially in such a historic and tumultuous region.  Domestic and international laws regarding objects of cultural heritage and other objects of value found at sea, including the International Convention on the Protection of Underwater Cultural Heritage, not to mention other bi-lateral or multilateral treaties may apply.  Interestingly, Palestine is not a signatory to the U.N. Convention on the Law of Sea, a treaty which may also have provided guidance, particularly Article 303, on the handling of this potentially priceless artifact.  That is, assuming the piece was actually found at sea.

Hopefully this rare and wonderful statue, which has so quickly vanished again from the world's view, will be displayed and made accessible for study in future.