It has been reported that the Russian government proposes to introduce new legislation which, if enacted, will cause millions of works of art and religious artefacts to be reclaimed from Russian museums and given to private religious organisations, including, mainly, the Russian Orthodox Church. It is said that the new law has nothing to do with justice, but is designed to bind the Church to the state and attempt to manipulate the religious leaders.

Further criticisms of the draft law include that “The cultural objects will become inaccessible by people of religions other than Russian Orthodox Christians” and “If enacted, the law would be in conflict with a number of constitutional principles and international regulations”. It is also likely to lead to a massive loss of thousands of ancient works of art deprived of skilled hands of qualified restorers.

The new law comes at the same time as renewed reports that hundreds of thousands of artworks are missing from Russian museums. Indeed, it is believe that as many as 250,000 works cannot be accounted for. This figure represents only 0.33% of the entire Russian museum inventory; however, in the context of Russian art potentially being taken away from Russian museums, it also represents further detriment to Russia’s cultural and artistic heritage. 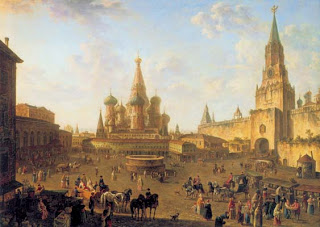 Red Square in Moscow - Alexeyev, Fyodor (Currently housed at the The Tretyakov Gallery in Moscow)

Email ThisBlogThis!Share to TwitterShare to FacebookShare to Pinterest
Labels: Russia