US returns looted art to Italy

This week saw the return by the United States of 26 pieces of art to Italy. Each work had been separately looted and subsequently smuggled out of Italy and into the US.

A Repatriation Ceremony was held at the US Embassy in Rome to celebrate the return of the pieces to Italy. The ceremony was a culmination of a lengthy investigation carried out collaboratively between the US Homeland Security Investigations (HSI) and the Carabinieri Tutela Patrimonio Culturale (TPC).

In his speech at the Ceremony, US Ambassador to Italy, John R. Phillips, noted that:


"Italy is blessed with a rich cultural legacy and therefore cursed to suffer the pillaging of important cultural artifacts. The collaboration between agents from HSI and investigators from the TPC has borne fruit in returning some important artifacts to their rightful home in Italy.

The plundering of historical and cultural artifacts is among the oldest forms of cross-border organized crime. INTERPOL estimates that the illicit trading in cultural property produces more than $9 billion in profits each year – only human trafficking, narcotics and weapons trades generate more illicit revenue.

The crime may be ancient, but the perpetrators are very modern. The use of the Internet has provided these criminals the ability to acquire, transport, advertise and sell valuable cultural property swiftly, easily and stealthily and while making it easier to evade detection by law enforcement agencies.

Some of the artworks that were returned include:

Sleeping Beauty, a 1,800 year-old, ancient Roman marble sarcophagus lid of sleeping Ariadne, which investigation revealed was smuggled out of Italy. HSI New York special agents seized the sarcophagus lid with a warrant issued from the Eastern District of New York.

A 5th century B.C. Etruscan black figured Kalpis, which is believed to have been looted in Italy and smuggled into the United States in 1981. After an investigation, our HSI office in Cleveland, Ohio, seized the Kalpis. 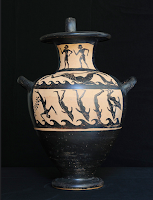 A 17th century Venetian bronze breech-loading gun, which was seized by CBP officers in Boston as it was being smuggled into the United States. After an HSI Boston investigation, the cannon was successfully forfeited.

Reportedly, no criminal charges have been filed in relation to any of returned artworks since, in some cases, the statute of limitations on any crimes would have expired, and, in others, the paper trail for the piece's import into the US was too difficult to reconstruct. In addition, these pieces represent but a fraction of the art currently circulating on the black market. Nonetheless, as Phillips stated "every victory, every piece that is returned, every bit of cultural history that can be restored to its rightful home is a measure of progress."