Cornered by his art?

Last week, after years on the run, one major Croatian Serb war criminals Goran Hadzic was arrested. Hadzic has been charged and found guilty in absentia by the International Criminal Tribunal for the former Yugoslavia for crimes he committed under the leadership of Slobodan Milošević between June 1991 and December 1993, including the persecution and murders of thousands Croats and other non-Serbs.

Reuters reports that it was actually a stolen painting by Modigliani that lead to his capture:

"The breakthrough was information that he (Hadzic) wanted to sell a stolen Modigliani painting as he was running out of money," Vladimir Vukcevic told a news conference. 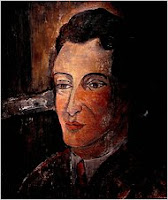 It is still unclear however whether the painting, believed to be “Portrait of a Man” by Modigliani (pictured here), is authentic – although the Art Loss Register (which I wrote about here) does list four Modiglianis as stolen. However, whether it is or not, the painting has already proven itself invaluable in bringing a major criminal to justice. The recovery of the stolen art would just be an added [multi million pound] benefit.