Cariou v Prince and the Gagosian Gallery: Fair use of photographs in artworks

Further to this post, the Gagosian, in association with Richard Prince, is in more trouble this month following a decision of the US District Court of the Southern District of New York which has made headlines around the world.

The claim was brought by professional photographer Patrick Cariou who had published a book of numerous photographs that he had taken of Rastafarians and landscape in Jamaica over a six year period. The defendants were Richard Prince, the well known so-called “appropriation artist”, as well as the Gagosian Gallery, the art dealer and gallery which inter alia represents Price and markets the artworks he creates.

The action concerned a series of paintings by Prince entitled Canal Zone, which included photographs from Carious’s book, Yes, Rasta. Prince had painted over some parts of certain photographs, used only portions of other photos, while some were used in their entirety or nearly so. Indeed, in total, Prince admitted using at least 41 photos from Yes, Rasta as elements of Canal Zone works. For its part, the Gagosian had displayed 22 of the 29 Canal Zone paintings at one of its Manhattan locations at the end of 2008. It had also published and sold an exhibition catalogue for the show, similarly entitled Canal Zone, which contained reproductions of many of the Canal Zone paintings (including some paintings which were not shown at the Gallery) as well as photographs of Cariou's photos in Prince's studio. Accordingly, Cariou brought his claim for copyright infringement and sought summary judgment. 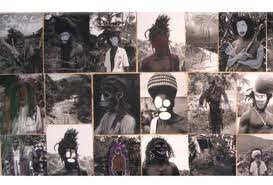 One of Prince's Canal Zone works - which uses Cariou's photos
The defendants did not dispute that Cariou owned a valid copyright in the photos. However, they asserted that his photos were mere compilations of facts concerning Rastafarians and the Jamaican landscape, which were arranged with minimum creativity in a manner typical of their genre, and therefore not protectable by law. The Court rejected this argument noting that it was a matter of long settled law for that creative photographs were worthy of copyright protection even when they depicted real people and natural environments. Therefore, Cariou’s photos were protected by copyright.

The defendants’ next argument was that their use of Cariou’s photos was allowed under the doctrine of Fair Use (as codified in Section 107 of the 1976 US Copyright Act). The Court considered each of the factors relevant in a finding of fair use and found that none favoured the Defendants for the following reasons:

1. Purpose and character of the use of the copyright work

The defendants’ claimed, the photos were merely the “raw materials” which they had used in the creation of new transformative works. The Court refused to accept that appropriation was per se fair use, and found that Prince’s works were only transformative to the extent that they comment on the photos, and so, to the extent that Prince’s works merely recast, transformed, or adapted Cariou’s photos, they were infringing derivative works. Further, the Court said, since, on the facts Prince did not intend to comment on Cariou’s photos when he appropriated them, the transformative character of his works was minimal. Indeed, the Court found that in the works which most heavily drew on Cariou's photos, such as those in which Prince used entire photos from Yes, Rasta, there was vanishingly little, if any, transformative element.

The Court then looked at whether the infringing works nevertheless served a commercial purpose of nonprofit educational purpose. While, the Court recognised the inherent public interest and cultural value of public exhibition of art and of an overall increase in public access to artwork, on the facts it held that the defendants' use and exploitation of the photos was substantially commercial, especially where the Gagosian was concerned. In this respect, the Court noted that the Gagosian had sold eight of the Canal Zone paintings for a total of US$10,4 million, and seven other Canal Zone paintings had been exchanged for art with an estimated value between US$6 million and US$8 million.

The Court was also considered the proprietary of the defendants’ conduct. The background facts showed that Prince's employee had contacted the publisher of Yes, Rasta to purchase additional copies of the book, but neither Prince nor his employee had ever asked the publisher about licensing or otherwise sought permission to legitimately use Yes, Rasta or the photos contained therein. Nor had Prince attempted to contact Cariou by email to enquire about usage rights to the photos, even though Yes, Rasta clearly identified Cariou as the sole copyright holder and even though Cariou's website displayed an email address at which he can be reached. Under these circumstances, the Court said, Prince had acted in bad faith. Moreover, since the record established that the Gagosian was aware that Prince is an habitual user of other artists' copyrighted work, without permission, and because it was equally clear that the Gagosian neither enquired into whether Prince had obtained permission to use the photos contained in the Canal Zone paintings nor ceased their commercial exploitation of the paintings after receiving Cariou's cease-and-desist notice, the Gagosian had also shown bad faith.

2. Nature of the copyright work

The Court found Cariou's photos to be highly original and creative artistic works constituting "creative expression for public dissemination" and "within the core of the copyright's protective purposes."

3. Amount and Substantiality of the portion used in relation to the copyright work as a whole

The Court noted that Prince had appropriated entire photos in a number of his paintings, and the central figures depicted in portraits taken by Cariou and published in Yes, Rasta in the majority of his paintings. Since those central figures were of overwhelming quality and importance to Cariou's photos, going to the very heart of his work, the amount of Prince's taking was substantially greater than necessary.

4. Effect of use upon the potential market for or value of the copyright work

It was clear that the market for Cariou's Photos was usurped by defendants since it was undisputed that a gallery owner had discontinued plans to show the Yes, Rasta photos, and to offer them for sale to collectors, because she did not want to appear to be capitalising on Prince's works and did not want to show work which had been "done already" at the Gagosian. Further, since it had been recognised that licensing original works for secondary use by other artists is the kind of derivative use that creators of original works do in general develop, and so the widespread unlicensed use in new artworks would destroy the market for such licenses, Prince had unfairly damaged both the actual and potential markets for Cariou's original work and the potential market for derivative use licenses for Cariou's original work.

Since none of these factors weighed in favour of the defendants, the Court held that they could not rely on Fair Use and, accordingly, the defendants were both found directly liable for copyright infringement of Cariou’s photos and the Court granted Cariou’s motion for summary judgment in its entirety.

In addition to restraining the defendants from infringing the copyright in the Cariou’s photos, or any other of his works, the Court ordered that they deliver up for impounding, destruction, or other disposition, as Cariou may determine, all infringing copies of the photographs, including Prince’s paintings and unsold copies of the Canal Zone exhibition book, in their possession, and other articles for making such infringing copies.

Damages remained to be assessed, but with Prince and the Gagosian having made millions of dollars from sale of the Canal Zone works, at this stage it looks like Cariou can expect a large pay day.

Have you heard about this case yet? It seems very similar... http://www.langorigami.com/info/sarah_morris_copyright_infringement.php4