Sir Anthony Caro, an internationally acclaimed sculptor and one of the leading figures on the English abstract art scene, has reportedly objected to the description by Bonhams of one of his sculptures as his work in their catalogue. Instead, he claims, the work been altered in such a way as to misrepresent his original work and, furthermore, infringes his moral rights. Explains The Guardian:

“The five-metre, rusted and varnished steel sculpture entitled Lagoon is part of the 20th Century British Art sale on Wednesday, has had a catalogue estimate of between £100,000-£150,000.

Caro, who was awarded a lifetime achievement award in 1997, said: "It's been mutilated. It had legs welded on to it and it is nothing like the original. It stands several feel higher than the original. It is going on show on public exhibition as a sculpture of mine and it's not.

"I sold it to Peterborough Sculpture Trust, who I understood to be trustees for sculpture to keep for future generations. I didn't know they would use it as something to speculate with. That doesn't make me very happy."

A spokesman for Bonhams said: "The sculpture was commissioned from Sir Anthony by the Peterborough Sculpture Trust, which is now selling the work through Bonhams in order to raise funds for its other activities. The work was commissioned to stand on outside has legs for support. During its long period of exposure to the elements the sculpture has become weathered and at some time was unfortunately spray painted in some areas by vandals. The spray paint has been removed with only minor traces remaining.

"Sir Anthony contends that the legs on which the sculpture stands are not his work although that is not the recollection of the trust's staff who dealt with the installation of the piece on site many years ago. Whether Sir Anthony was responsible for the legs or not they have no impact on the artistic integrity of the piece. They are invisible when the piece is placed in the ground outside as originally intended."

Sir Caro has apparently offered to buy back Lagoon, which he sold to the trust in 1984, but the parties have been unable to agree terms. Neverthless, Caro retains his moral right to object to derogatory treatment of the work – which includes: distortion or mutilation of the work or treatment that is otherwise prejudicial to the honour or reputation of the author. If Sir Caro was not aware of the alterations to his work, the addition of metal legs, the graffiti as well as the deterioration in the general condition of the work due to lack of care, may well be considered sufficiently prejudicial to his honour and reputation, if not to mutilation of the work. Accordingly, he could have a good claim for infringement of his moral rights. 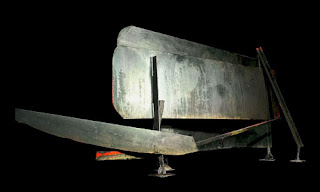