Was the Olympic Opening Ceremony original?

The London Olympic Games opening ceremony in July was declared a triumph, with its director Danny Boyle tipped for a knighthood. Most should recall that the opening feature of the ceremony a rural scene including a spiral mound based on Glastonbury Tor, a lake and a water wheel, a farmhouse replete with live animals, and a model village with actors portraying villagers, football and cricket players. 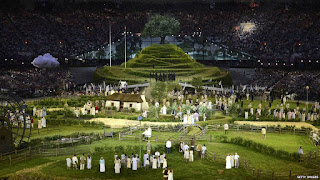 Now that the dust has settled, however, a claim has emerged that this part of the opening ceremony was copied from a design submitted to a London 2012 art competition.


[Lee Merrill Sendall] submitted his design for Large Spiral Mound in 2009 to the Artists Taking the Lead competition – a joint initiative by Locog, the organisers of the Games, and Arts Council England (ACE) to fund 12 regional projects where artists could create an Olympic legacy.

Mr Sendall, 42, from Hull, was shortlisted for the £500,000 prize for his proposal to build a 200ft spiral Neolithic mound in East Yorkshire, representing the ancient history of the United Kingdom.

One of five finalists, in October 2009 he presented his proposal to a panel of judges including officials from Locog and ACE, with illustrations, a slide show and a written brief. He also provided judges with a set of postcards featuring the images.

Mr Sendall said: “When I saw pictures of models presented by Danny Boyle and his team for the opening ceremony, I was stunned at what appeared to be a copy of my proposal. “On the night of the opening ceremony, I received messages from relatives and friends asking if Danny Boyle had permission to use my idea. “Too many of my concepts and visuals appeared in the ceremony to be shrugged off as coincidence. I would have liked to have been asked if my ideas could be used and I would like proper credit for the project which I put a lot of work into.”

Mr Sendall is said to have sought legal advice, but is unlikely to pursue a claim given the costs involved. It appears that he is speaking out now with the aim of receiving some recognition of his ideas.

Unfortunately, as many of us know, copyright protects the expression of ideas, not the ideas themselves. Additionally, copyright infringment requires copying, which has been denied by Locog in a statement which said: “Danny Boyle was not involved in the Taking the Lead programme, which was funded by the Arts Council, and would not have seen any of the submissions...Danny’s vision for the opening set for the Olympic Games opening ceremony was inspired by the very well known Glastonbury Tor landmark and British history.” Locog also reportedly told The Art Newspaper: "The vision was Danny Boyle's and his only."