Challenge to sale of Paolozzi sculpture?

While Tower Hamlets is selling its public artworks, Camden Council is reportedly planning to challenge the of a statue by sculptor Eduardo Paolozzi. 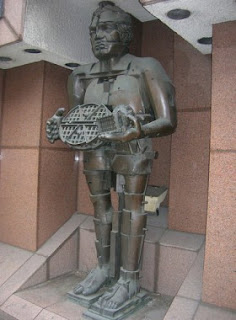 The statue has been on public display in central London outside an office block in High Holborn for 25 years. It is said to be based on a self-portrait of Paolozzi, featuring him as the Greek God Hephaestus. It sold at auction for £140,000 on 14 November.

The Camden Council has reportedly says that the sculpture was removed without the correct legal permission and that despite the sale, they will fight to get the statue reinstated. The Camden New Journal reports:

A Town Hall spokeswoman said: “The council is very concerned about the removal of this statue from the building. We are exploring whether we have any powers to compel the owners to retain the statue in its position.”
...
The 20th Century Society’s [a leading conservation body who also oppose the sale] conservation officer Henrietta Billings said the statue must be returned. She added: “He is one of the UK’s most important 20th-century artists.

"While a private commission, it is very clearly built into the front facade. There is a space for it and it isn’t small.”

The expert added that its removal – it was taken away over the weekend – could break planning law because although the building is not listed, it is in a conservation area.

She added: “It is an integral part of the streetscape. It has been whisked away without any discussion. It may be private property but it is public art in a public area.

"They should have sought planning consent. If we were to lose this, people will look at its aesthetic and historic value in years to come and wonder why it wasn’t saved.”