The Intersection of Creativity and Ingenuity

New art forms—and the artists who practice them—have transformed and inspired the ad world for many years.  Developments in lithography revolutionized advertising by allowing for large-scale color printing in the 1880s.  Fast-forward to today, and the picture becomes far more complex.  In recent decades artists have used their creativity to push the limits of technology, and the internet provides a platform for unlimited publishing and sharing of these ideas.  Yet, it created perils too, as a little-known artist could abruptly find his or her works copied on the other side of the world.
As some readers are likely aware, ad agencies often seem to be at the heart of these creative contretemps.  New York sculptor Ryan Johnson’s 2007 work, “Pedestrian,” bears a marked similarity to an outdoor sculpture UPS advertisement in Jakarta created by Ogilvy & Mather in 2010.  According to Co.Design, Ogilvy defended the works, stating that the resemblance to Johnson’s sculpture was nothing other than mere coincidence. 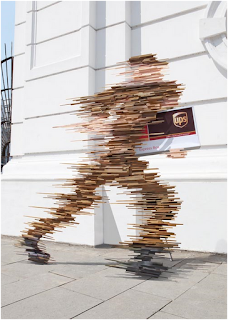 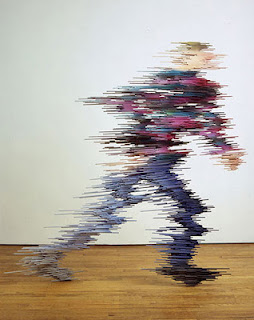 In 2010, marketing firm Space150 created a Forever 21 billboard in Times Square that was widely criticized for its similarity to a 2009 piece by artist Chris O’Shea.  In each piece a large screen broadcasts a camera view of the crowd below.  In the Forever 21 billboard, a female model then appeared to play with and photograph members of the crowd.  The billboard was predated by O’Shea’s piece “Hand from Above” which featured a hand tickling and picking up members of the real time crowd below.  According to Fastcompany.com, after some public pressure Space150 later stated that it was inspired by O’Shea’s work.
During the 2012 Olympic games, Cadbury released a swirling animated ad created by ad agency Publicis Dublin, where the movement of the purple and gold animation mimics that of Olympic athletes.  This gorgeous animation bears a striking resemblance to pieces created by artists Memo Akten and Quayola called “Forms” also based on Olympic athletes.  The artists describe these works as “a series of studies on human motion, and its reverberations through space and time.”  The works were published online several months before the Cadbury ad.
“Hand from Above” and “Forms” both raise some really interesting intellectual property questions.  Not only do the works consist of the moving images viewers see on a billboard or computer screen, they also consist of a back end, computer code, written specifically for the piece.  That being the case, the works present two potentially protectable embodiments within a single artwork.  Under U.S. copyright law, copyright protection extends to all copyrightable expression embodied in a computer program, but not to the ideas, program logic, or algorithms that may underlie the program.  The issue of protecting the code becomes further mired in questions of ownership and whether the works consist merely of a cobbling of appropriated bits from creative code projects such as Cinder or OpenFrameworks.  Use of code from these projects may be subject to simplified licensing requirements such as those set forth under the MIT License.  The willingness of these new media and code artists to share with one another is the basis for dynamic, thriving creative communities.  However, this relatively new medium is also fraught with perils as technical know-how can be bought and creativity emulated for commercial purposes.  Here, at this intersection of creativity and ingenuity, it can be difficult to draw the line between copies, inspiration, and contemporary creative dialogue.
Posted by Rachel at 15:30:00