The botched restoration of the Ecce Homo fresco has received quite a bit of attention lately.  As Jeremy wrote in our post of 23 August, the fresco, located in a church near Zaragoza, Spain, was "restored" by an elderly, untrained parishioner named Cecilia Gimenez.  The result of her efforts was to transform the portrait of Jesus into what one individual describes as "a very hairy monkey in an ill-fitting tunic." This gaffe inspired a great deal of commentary and humor around the world.  (One of my personal favorites here). 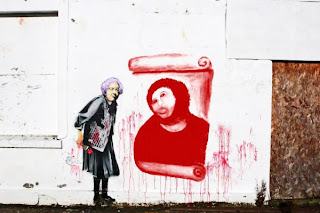 However, it seems Gimenez's work may have inspired another, more well-known artist.  Over the weekend this image appeared on 9GAG.  Although the piece has yet to be confirmed as genuine, perhaps world-renowned street artist, Banksy, is paying tribute to Gimenez.  The image is not on Banksy's own website, causing many to question its authenticity.  It would appear that the piece is likely a fake, another part of the ongoing Ecce Homo internet meme.

And if the piece were real?  All of this could be viewed as one vandal paying tribute to another.  However, Gimenez claims to have had permission to restore the fresco.  And Banksy?  Banksy's work is known to sell for hundreds of thousands of dollars, if not more.  That being the case, some would argue his pieces no longer constitute vandalism, as properties graced with a genuine Banksy experience significant increases in their value.  In some cases when a building with a Banksy is sold, the art piece tends to comprise most, if not all of the sale price, with the building a mere afterthought.

Try your hand at a restoration here on BBH London's Cecilia Prize website.

you know this is just a photoshop of a prior banksy piece, right?

Ok, she ruined the painting, but we are living in a time where art is accidental. She accidentally created one of the greatest trends on the internet for 2012.

She may have ruined the painting but also in the result produced her own artwork, which if reproduced could give her an action for copyright and moral rights infringement!