Legal Beauties: the new way to find a wife


Should any reader be in need of a wife, you have one more week to get yourself to the 'Sleeping Beauty' exhibition at the National Art Museum of Ukraine and pick one up.

In what must surely be up there as one of the strangest shows ever staged, the museum has merged art and love (or at least marriage) like never before. Visitors to the show wend their way amongst white, raised beds on which the exhibits are 'sleeping'. These exhibits are five attractive young women in full-length white satin nightgowns, each of whom take turns to act as Sleeping Beauty for two hours at a time. 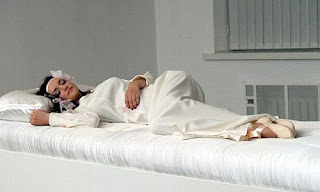 And the comparison doesn't stop there. If a single male visitor aged 18 or over should wish to take one of the Beauties home, he may kiss her - and hope that while he's at it, she opens her eyes. If she does so, that's when the legal side kicks in. Prior to taking part in the show, each exhibit must sign a contract stating that if she opens her eyes when being kissed, she will marry the kisser. Likewise the visitor must agree that "If I kiss the Beauty and she opens her eyes, I agree to marry her". (Female visitors may kiss the Beauties too, but Ukraine doesn't permit same-sex marriage).

It's an unusual way to find a partner but as some reviews have pointed out, given the number of marriages which end in divorce, the Beauties and their princes may statistically have as good a shot at a relationship as those formed in the traditional way. As one of the Beauties pragmatically told the Independent, 'Anything can happen in life. What if it's my destiny and this is the only way for me to meet my soulmate?'

What indeed. However, it must surely have crossed the exhibits' minds that their Prince, whilst a good kisser, may turn out to be unattractive or unpleasant on further investigation. In that case, would their peculiar contracts be binding? Could a one-line agreement with a stranger hold you to marriage under Ukrainian law? So far, none of the Beauties are reported to have opened their eyes whilst being kissed - so we may never know.

The Sleeping Beauty exhibit runs from Aug 22 to Sept 9.

Read more in the Independent, the Guardian  and Jezebel.