The first verdict in the one of the largest art frauds in Europe was delivered last week. Relating to the case of more than 1,000 fake sculptures by Alberto and Diego Giacometti which were uncovered by police in Germany in 2009, the FT reports:

“The trial of five suspected forgers has been going on for months in Stuttgart, and now a first verdict has been handed down in court. Three of those in the dock – two art dealers from Wiesbaden and the wife of a Mainz art dealer – have pleaded guilty to fraud and forgery and were sentenced to two years’ prison, suspended, plus a fine for two of them. The others, the Mainz art dealer, and a self-proclaimed “count”, Lothar Wilfried Senka, have admitted some of the charges but deny others; this case continues.

...Stuttgart prosecutor Dr Mirja Feldmann says that the “count”, identified in media reports as Senka, claims the sculptures came from Giacometti’s brother Diego. Feldmann also told me that the Mainz art dealer has admitted that he thought that the sculptures were fakes, but says that he owned the plasters and never had any intention of selling them. He also admitted issuing provenance certificates. A verdict is expected this spring.”

Considering that the total value of the pieces would have been hundreds of millions of pounds, if they were genuine, and that a number of dealers and collectors had already acquired large numbers of the sculptures for an estimated total of €9 million, a suspended prison sentence seems like a rather light penalty given the extent of the fraud.

A selection of the sculptures which were seized: 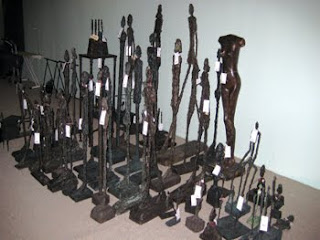