The Art Loss Register (ALR) operates the world's largest permanent and private database of stolen and lost works of art, antiques and valuables, to assist law enforcement agencies in the battle.

The ALR was established in 1991 and took over the work of the International Foundation for Art Research (IFAR), a not-for-profit organisation based in New York, which had established an art theft archive and began publishing “Stolen Art Alerts” in 1976 in an attempt to deter international art theft. The ALR now offers a range of services, including the registration, search and recovery of artworks to collectors, the art trade, insurers and worldwide law enforcement agencies.

Recently, the success of the ALR in restoring a stolen piece of art to its rightful owners was demonstrated here in the UK.

Artworks from the collection of the late fashion designer, Gianni Versace, went on sale at auction in March 2009. However, prior to the auction, one of the main attractions, a portrait of Major George Maule by 18th century German neoclassical artist Johann Zoffany was withdrawn. 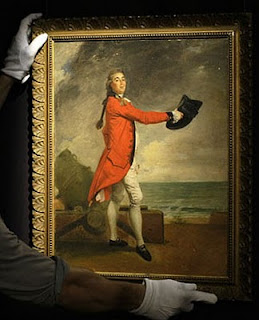 An English family, who were direct descendants of the painting's subject, had recognised the piece as an old family heirloom when the auction was advertised, and contacted the ALR to seek to recover the painting.

Because the ALR was only established in 1991, it may have been thought that there was little the ALR could do to assist. Indeed, Versace was said to have been unaware that the painting had been stolen when he had purchased it. Fortunately, Vesace's estate, was willing to work out an arrangement to return the painting to its original owners, and it was ALR who helped to negotiate the case between the two parties. Thus, last week the painting had been reunited with family.