Unfortunately, while I got a good view of Heather Skuker’s surreptitious photos, I missed the Tate Modern’s recent exhibition “Exposed: Voyeurism, Surveillance and the Camera”. Also composed of photographs taken on the sly, without the explicit permission of the people depicted, Exposed included pictures, dating from the late nineteenth century to present day, of professional photographers and artists, as well as CCTV images.

“The UK is now the most surveyed country in the world. We have an obsession with voyeurism, privacy laws, freedom of media, and surveillance – images captured and relayed on camera phones, YouTube or reality TV.

Much of Exposed focuses on surveillance, including works by both amateur and press photographers, and images produced using automatic technology such as CCTV. The issues raised are particularly relevant in the current climate, with topical debates raging around the rights and desires of individuals, terrorism and the increasing availability and use of surveillance. Exposed confronts these issues and their implications head-on.”

His answer to the first question was yes, English law should provide for privacy protection. For, although the growth of technology has allowed every detail of our private life to be captured, the privacy of our lives still needs to be protected.

In respect of the second question, however, he was not able to give such an unequivocal answer. Lord Hoffmann noted that it is difficult for the law to protect privacy for two reasons. First, the cost in bringing privacy proceedings tends to deter anyone other than the very rich or those on conditional fee arrangements from bringing these actions. Second, once the private information that requires protection has been made public, legal action becomes a most ineffective response. To illustrate this second point, Lord Hoffmann recalled Max Mosley’s well-known case against the New of the World for the invasion of his privacy. In that case, Mosley sued the publishers of the News of the World, following publication of an article which claimed an orgy in which he had participated had Nazi overtones, which was accompanied by images and video footage which had been taken on a hidden camera. But, although Mosley won and was awarded £60,000, the damage caused to him by the invasion of his privacy was clearly permanent, constant and worldwide. Moreover, he only recovered costs of £420,000 against his actual costs of £510,000, which left him out of pocket, as well as subjected to exposure of the very information that the court had ruled was private.

Thus, although, again, the exhibition has some very powerful images, it also raises some very important issues as to the boundaries between the public image and the private act.

No longer at the Tate Modern, Exposed can now be found at the San Francisco Museum of Modern Art until 17 April 2011. I know I would be willing to make the trip. 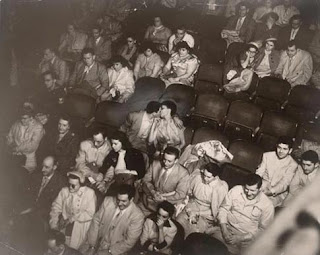