UNESCO and the Greek government have made longstanding appeals to the UK to enter into mediation over the possible return of the controversial ‘Elgin Marbles’, the sculptures removed by Lord Elgin from the Parthenon in the early 1800s that, following their purchase by the British Government in 1816, became part of the British Museum’s collection. This week the British Museum wrote an open letter to UNESCO declining to participate in mediation, but suggesting that it was open to a possible ‘joint venture’ with the Acropolis Museum.

Justifying its rejection of UNESCO’s offer to mediate, the British Museum argued that the matter fell outside UNESCO’s mandate to ‘preserve and safeguard endangered cultural heritage’. Since the surviving Parthenon sculptures are “carefully preserved in a number of European museums”, they “clearly do not fall into this category".

Secondly, the letter suggested that the UNESCO-facilitated mediation only concerns intergovernmental disputes, whilst the British Museum “is not a government body, and the collections do not belong to the British Government.” It was expressed that any collaborative ventures with Greek institutions would "not [be] on a government-to-government basis".

The letter reminded UNESCO that the British Museum has ‘routinely lent to Greece’, and enjoys ‘excellent collaborative relationships with Greek museums and universities’. Sidestepping the long-running debate over the legality of Lord Elgin’s actions, the British Museum stated that the Elgin Marbles are held “for the benefit of the world public, present and future”, and invited the Museum’s Greek counterparts “to explore new ways of enabling the whole world to see, study and enjoy the sculptures of the Parthenon.”

The letter promoted the British Museum’s current exhibition ‘Defining Beauty: the Body in Greek Art’ as an example of the ‘great public benefit’ of inter-museum loans. Meanwhile, the controversial loan of one of the Parthenon sculptures to Russia at the end of last year - which at the time had provoked a furious reaction from the Greek government – was described enthusiastically as ‘Russia’s first glimpse of the splendours of fifth-century Athens’. 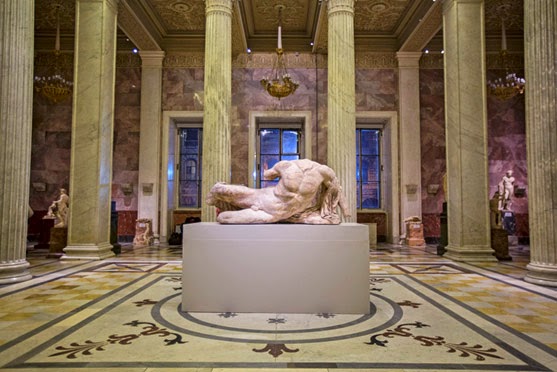 The ‘Ilissos’ from the Parthenon on display in the State Hermitage Museum, St Petersburg, 6 December 2014 – 18 January 2015 (British Museum)

A second letter addressed to UNESCO, sent on the same date and signed by the UK Culture Minister Ed Vaizey, adopted a markedly different tone.

The British Government also called out what it saw as Greece’s intent to deny the British Museum’s right of ownership during the mediation process, and added that legislation limits the British Museum from de-accessioning objects in their collections.

The Greek government responded by issuing a statement “deploring” the British Museum’s refusal to enter mediation, adding: "British negativism is overwhelming, along with its lack of respect for the role of mediators". It has been suggested that the UK’s refusal to join the mediation process could result in legal action by the Greek government in an international court to reclaim the ancient sculptures.

UK polls have consistently showed strong support in Britain for returning the sculptures: an opinion poll conducted by YouGov in October 2014 showed that only 23% of the British public thought the Marbles should stay in Britain.

Unfortunately, the public's appetite for change has not been reflected at a political level. An early day motion tabled earlier this month in the House of Commons urged the British Government to act to “reunite these British-held Parthenon sculptures with those now displayed in the purpose-built Acropolis Museum in the shadow of the monument to which they belong, the Parthenon”. It garnered a mere 20 signatures out of a possible 455.
Posted by Marian at 08:30:00