Did Doig do it?

A claim has been filed in the US Federal Court against Scottish artist Peter Doig, Doig's art dealer and Doig's lawyers seeking a declaration attributing this painting to Doig. 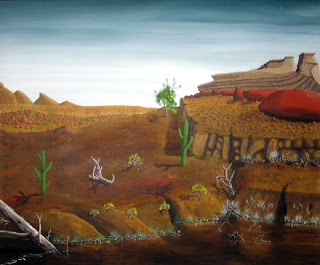 The Plaintiff, Robert Fletcher, claims that this painting, that he owns, is an early Doig painting worth millions, but that Doig refuses to acknowledge it as his work.

The Complaint explains that Fletcher was a correctional officer at Thunder Bay Correctional Facilities in Ontario in the 1970s. At this time, an individual called Pete Doige became an inmate. Fletcher became friends with Pete Doige who then sold him the painting which he had painted in his art class at Thunder Bay.

The Courthouse News Service reports that it is also alleged that:


Fletcher claims he helped Doig apply for parole, and was assigned as his parole officer.

Fletcher helped Doig in his search for employment, and helped him to obtain employment through the Seafarers Union in Thunder Bay...

Fletcher also encouraged Doig to pursue his artistic talent, and accepted Doig's offer to sell the work to Fletcher for $100.

Since that day in or about 1976 and to the present, Fletcher has owned the work.

He claims that "many years later, a friend staying with Fletcher commented on the work hanging in Fletcher's home, mentioned that it might be by Peter Doig, and began doing research on the artist and the painting, which was later continued by Bartlow [the Second Plaintiff] on Fletcher's behalf."

But VeneKlasen, on behalf of Doig, denied that the painting was by Doig, and denied that Doig had ever been to Thunder Bay.

Back in November 2012, a HuffPost article on the dispute noted that Fletcher just wanted to establish the truth. Seeing as he is now seeking punitive damages for interference with prospective economic advantage, it seems that he now has his eyes on a greater truth.