Zorro: The Clash of Trademark Law and the Public Domain 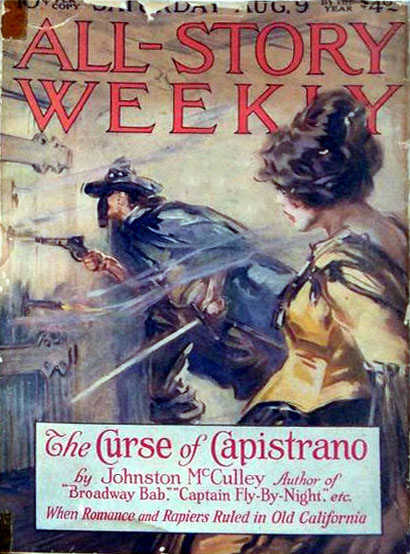 A new lawsuit filed this month in U.S. District Court explores the tension between trademark law and intellectual property which has otherwise fallen into the public domain.  Generally, new artistic works are subject to copyright protection of a limited duration, calculated by the author's life plus a term of years after the author's death.  Once the copyright expires, the work becomes part of the public domain, and it is free for others to use.

However, these issues are not necessarily so clean cut when another party finds a way to assert trademark rights in that material.  Trademarks protect brands, and serve to indicate the source of goods and services in commerce.  Because trademark rights can be potentially infinite, a party may attempt an end run around the public domain by asserting a monopoly over a famous name or character through trademark law--and such is the case with Zorro, alleges plaintiff playwrite Robert Cabell.

According to Cabell's complaint, he created a musical based on the fictional Zorro character that first appeared in Johnston McCulley's serial story, The Curse of Capistrano in 1919.  Under the U.S. Copyright Act in force at the time, the copyright in McCully's Zorro story expired in 1975, and the story became part of the public domain after that time.  Cabell's musical, first released as an audio CD in 1996 has since been made in to a stage production and is scheduled to be performed at a festival in Germany this summer.  However, Cabell alleges that the defendants named in the case fraudulently obtained multiple U.S. trademark registrations during the 1990's in the Zorro name, and are using those marks to interfere with his ability to perform the play by threatening lawsuits against those intending to the produce the play.  Cabell asserts that defendants tortuously interfered with his business relations, and he also seeks declaratory judgment of non-infringement and cancellation of all of defendants' Zorro trademarks.

Whether Cabell's claims have merit is yet to be determined, but it looks like Zorro's next duel will be in court.
Posted by Rachel at 15:06:00