Kitchen art a bargain at 23 euro 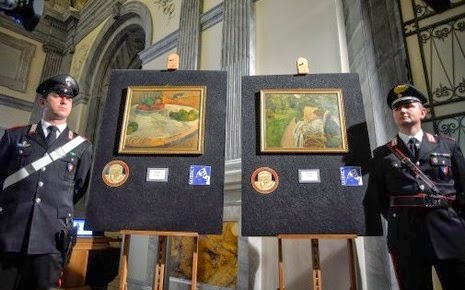 The two paintings shown above, displayed under police guard, were found hanging on an Italian factory worker's kitchen wall, where they had been for the past 40 years. According to the BBC's version of the story, here, the art works -- by Paul Gauguin and Pierre Bonnard -- are said to be worth at least 10.6m euros (£8.8m). The story goes that they were stolen from a collector's London home in 1970 and, having been left on a train in Italy, with no indication of origin, they were purchased by a Fiat worker at a lost-property auction in 1975 for the princely sum 45,000 Italian lire (that's around 23 euros, or £19).

Italian culture minister Dario Franceschini claims this as something of a triumph:


"It's an incredible story, an amazing recovery. A symbol of all the work which Italian art police have put in over the years behind the scenes".

It's not immediately clear, though, what the Italian art police have been doing since 1970 since their involvement only appears to have started when the factory worker's son, who had a suspicion that one might be an original Gauguin, contacted art experts. If they'd attended the same lost property auction as the works' purchaser they might have been able to intervene a little earlier ...
Posted by Jeremy at 11:16:00