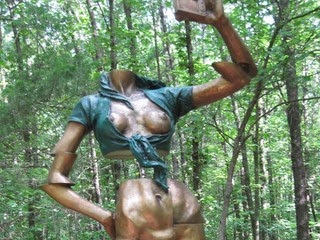 A perplexing news story emerges from Overland Park, Kansas regarding a bare-breasted sculpture housed in the city's international sculpture garden.  Since early 2012 local conservatives have waged a war on the piece, Yu Chan's "Accept or Reject," a bronze sculpture of a woman, topless and holding a camera to photograph herself.  Those who oppose the sculpture do not seem to take issue with the fractured, disjointed, gutless, headless, depiction of the female form, instead they protest the sculpture's naked breasts, and allege that the sculpture will encourage children to engage in "sexting." When complaints to local government did not appease them, opponents of the statue then teamed with the American Family Association (AFA), a national conservative organization.  The group gathered over 4,000 signatures, enough to impanel a grand jury under local law, a procedure sometimes referred to as a citizen's grand jury.

Grand juries are generally summoned to investigate and determine whether there is enough evidence to formally charge an individual with a crime.  In most cases, the grand jury is called by a prosecuting attorney or judge, however some states allow citizens, with enough petition signatures, to assemble a grand jury.  Citizen grand juries have the same powers to call witnesses and issue subpoenas.  Slate offers this critical discussion of the use of citizen grand juries by conservative groups.

Opponents of the sculpture requested that the grand jury determine whether the sculpture was legally "obscene."  The petition was unclear whether the AFA sought criminal charges against the sculpture, city, arboretum, or unnamed officials.  Although authorized to conduct investigation for up to ninety days, the jury convened for less than one day in fall of 2012 before determining that the piece did not constitute obscenity. To prove obscenity under the law, one must show that the work lacks serious artistic merit, that it depicts, in a patently offensive way, sexual conduct as described by state law, and in addition, that under contemporary community standards the work appeals to the "prurient interest." It seems a losing proposition when the target is a work of art in a sculpture garden, still, the AFA is undeterred and is attempting to gather a second grand jury.  This second attempt is undertaken after the AFA accused the local prosecutor of "hijacking" the first grand jury and sought amendment to the state law mandating that the citizens who impaneled the grand jury to be called as the first witness to testify.

Odd as it may be, this is not the first time criminal process has been employed against the showing of artworks.  Famously, in 1990, the Cincinnati Contemporary Arts Center and its director were indicted for obscenity for displaying works by Robert Mapplethorpe and the matter went to trial.  This was the first known occasion of criminal charges against a museum director for hanging an artwork on a wall.  The jury took testimony from leading museum directors, among others, and viewed photographs for several days before determining that the museum and its director were not guilty.

It remains to be seen whether the AFA will succeed in indicting a sculpture.  Perhaps most ironic is that this sculpture, which has attracted so much ire, is not slated to be permanently situated in the arboretum, rather the work is a part of a first phase of the international sculpture garden focusing on Chinese works and is expected to remain in place for only three to five years.