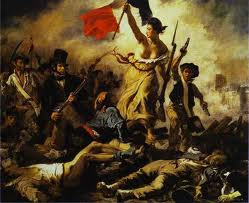 "Delacroix Liberty painting defaced in Louvre" was the headline of a recent BBC news item. The painting in question is portrayed above.  According to the article:


"French police have detained a woman accused of defacing an iconic Delacroix painting, Liberty Leading The People, at a branch of the Louvre Museum.She was held after being seen scrawling a graffiti tag on the painting, a Romantic masterpiece painted in 1830 to celebrate a French uprising. The museum in the northern town of Lens said the work might easily be cleaned but would be examined by a restorer. ...

The painting by Eugene Delacroix, which featured on the pre-euro, 100-franc French banknote and reportedly inspired the Statue of Liberty in New York, is being exhibited in Lens for a year.French media quoted unnamed legal sources as saying the graffito was a clear reference to a 9/11 conspiracy theory. ...

Just before closing time the previous day, a 28-year-old woman scrawled the 30cm (12in) graffito on the bottom of the painting and was immediately detained by a museum guard, France's 20 Minutes news website reported.

The work itself, which commemorates the July Revolution of 1830, measures 325cm by 260cm.

The mark may be "easily cleaned" but a restoration expert was being sent from the parent museum in Paris, the museum said in a statement.

No decision has yet been taken on whether the painting will have to be removed, the museum was quoted as saying by French broadcaster France 3.

The local prosecutor, Philippe Peyroux, told AFP news agency that the woman in custody appeared to be "unstable" and that he had requested a psychiatric examination. He added that the woman, whose identity has not been released, had a "French-sounding name ..."


The painting's iconic status may have made it an attractive target for anyone wanting to publicise a 9/11 conspiracy theory, but there are better ways of getting a message across than defacing the original.  The painting is out of copyright and can thus be modified or otherwise exploited without the need to prevent others enjoying the original, as the examples above and below show:

Exercises like this not only strengthen the ability of the original to serve as a reference point but attract copyright in their own right as original artistic works or emanations of the author's own intellectual creation. If the lady with the French-sounding name had imposed her graffiti tag on a copy and pushed it out on to the social media, with some prospect of it going viral, she might have achieved not only more publicity but more positive publicity too.
Posted by Jeremy at 11:41:00