Presumably this unfriendliness was connected with Spalding's new book Con Art: Why you ought to sell your Damien Hirsts while you can.  He has been outspoken about Hirst's works to say the least, saying last week that they have 'no artistic content and are worthless as works of art'. He added that anyone who's bought one had better sell it fast before we all realise they are worthless in financial terms too. Hirst himself has said stoically that criticism of his work is 'to be expected' but it seems Tate not only expects criticism, but wishes to head it off at the pass. 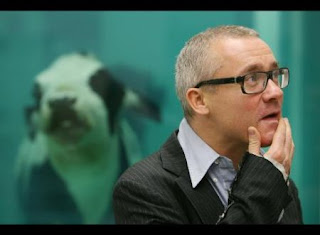 Spalding had planned to give interviews to the BBC and other stations from inside the exhibition. But when a BBC reporter asked to bring him inside, Tate's staff apparently 'went ballistic' and refused to let him in (we can assume they don't subscribe to the feeling that all publicity is good publicity). He gave his interviews outside the building instead.

It would be interesting to know the grounds on which Spalding was excluded. A quick glance at the gallery's online policies gives no obvious answers, unless Spalding's interview could be deemed 'noisy and improper' or possibly 'threatening behaviour', two reasons for which Tate reserves the right to get rid of troublesome visitors.

But 'not liking the exhibits' is not normally considered a sound basis for excluding viewers from a public gallery - particularly not when that gallery received 40% of its funding from taxpayers.