Is McBanksy at large in Edinburgh? 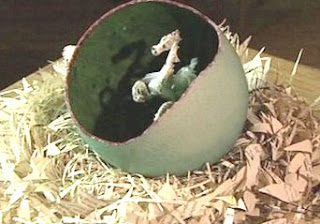 "The mystery of Scotland's secret sculptor", as reported by the BBC here, explains that Edinburgh has its own secret artist who has been strategically depositing a series of delicate sculptures made from books in cultural establishments across the city. Speculation is rife as to whether the artist is operating Banksy-style in order to make some sort of cultural statement or whether the whole exercise is an elaborate con, designed to stimulate tourist interest in the city. One journalist, interviewed in the BBC's video clip, maintains that she knows the identity of the artist but refuses to reveal it.

The identity of the artist is a matter of legal significance for copyright reasons, if no others, since special provisions govern anonymous works in the United Kingdom and many other jurisdictions.
Posted by Jeremy at 23:39:00