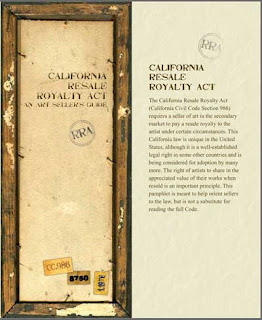 Christie's Inc and Sotheby's Inc were sued last Tuesday in U.S. District Court, Central District of California, by a class of artists: New York painter Chuck Close, the L.A. artist Laddie John Dill, the estate of Robert Graham and the Sam Francis Foundation (only for Christie's).

The proposed class action was filed alleging that, the auction houses violated the California Resale Royalty Act, unlawfully failing to pay artists resale royalties for their works' sales in California.

1977 California resale royalty law grants  to visual artists 5% of the proceeds from the resale of artworks under certain conditions, that: the seller lives in California or the sale occurs there, and only for specific kind of art defined as "an original painting, sculpture or drawing or work of art in glass". This resale right is extended for 20 years after the artist's death, also to the artist's heirs.

This law was inspired to the European visual artists royalties known as the French "droit de suite" now spread throughout the European Union, thanks to the implementation of the European Directive 2001 /84, that took effect, also in Ireland and Great Britain, which previously didn't allow visual artist's resale royalties.

The plaintiffs charge the auction houses ruotinely violate the law hiding the identity of the sellers and their residencies. In their turn, Christie's and Sotheby's have announced they will charge this law for constitutionality issue, since it could conflict with U.S. federal copyright law.

> This law was inspired to the European visual
> artists royalties known as the French "droit de
> suite" now spread throughout the European Union,
> thanks to the implementation of the European
> Directive 2001 /84, that took effect, also in
> Ireland and Great Britain, which previously
> didn't allow visual artist's resale royalties.

Even if the implementation of that EU directive has caused the spread of resale royalties throughout Europe, it is unclear how "evenly spread" that spreading actually is. A review of the situation undertaken in 2003 during the debate over "harmonization" of Australian law stated:

>> of the eleven EU Member States that currently
>> have droit de suite legislation, seven do not
>> enforce it, or at the very least, do not enforce
>> it on a regular basis.

(from a 2003 Media & Arts Law Review article "THE RESALE ROYALTY AND AUSTRALIAN VISUAL ARTISTS: PAINTING THE FULL PICTURE"). Many people do not believe that resale royalties are likely to benefit more than a small minority of artists. To see some comments from the view of some Australian artists and art dealers, see the discussion at Professor Jeremy Phillips' 1709 blog
http://the1709blog.blogspot.com/2010/12/artist-resale-royalty-harmonisation-and.html .

Have read that there are untested constitutional issues about the Californian scheme, but have not seen a clear explanation of what aspect of the constitution they might be in conflict with.... Do you know??

My suspicion is that the scheme may not be limited enough to be considered to not violate the Commerce Clause. I don't know what the exact limitations are in this law, but if all three of the buyer, seller, and artist must all be Californian, it seems a bit pointless.