The Barbican Art Gallery in the City of London suffered what was apparently the first art theft in its history in May this year.

Thieves stole a number of parts from a sculpture entitled "Glass Plant: Garbage Bricks" (1970-1971) by artist Gordon Matta-Clark which was on display in the exhibition "Pioneers of the Downtown Scene, New York 1970s", which the Gallery hosted between March and May. 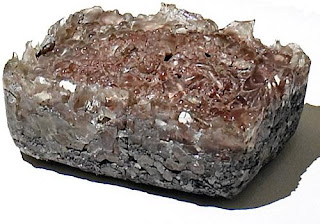 Not your average brick. One of bricks from the sculpture - made from bottles gathered from New York city by Matta-Clark.

The Gallery tried to track down anyone who might have seen what happened to the work using booking information and members' details, but has so far been unsuccessful. It has now offered a reward for information leading to the recovery of the piece.