While his porcelain sunflower seeds remain scattered across the turbine hall of the Tate Modern, the artist, Ai Weiwei remains in detention in China more than two weeks after he was arrested in Beijing. 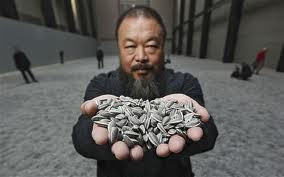 As we reported here, Ai Weiwei's installation courted several legal problems when it opened in October 2010. These pale into insignificance however in the context of the artist's current position.

On 3 April 2011, the artist was detained at Beijing airport as he attempted to catch a flight to Hong Kong. The Chinese police have also searched his studio, confiscated his computers and questioned his assistants.

The Chinese foreign ministry has said that Ai is being investigated for economic crimes, but few further details have been supplied. However, as one of China's best known artists, known for his open criticism of the government, it seems that he has, contrary to the claims of the government, been targeted for his social and political campaigning. Indeed, in the weeks leading up to his arrest, numerous other Chinese artists, writers and online commentators were arrested and detained as the Chinese government continues to seek to quash all activists and dissidents. Further, Ai reported that he was being harassed at his Beijing studio and was under constant police surveillance. He said that the “reality of China” was that those who reflected on democracy, opening up, reform and reason were either detained or thrown into jail.

Nothing further has been heard from Ai Wei Wei since his arrest and his detention has triggered criticism from the EU, the US and other Western governments, as well as the UN's working group on enforced or involuntary disappearances. There have also been international protests staged in his support.