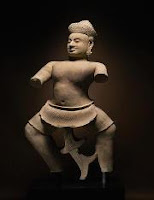 Another update, this time to the Cambodian art dispute reported here.

By way of reminder, in August 2011, the US government intervened in a claim by the Cambodian government in respect of an ancient sandstone statue that was listed for auction by Sotheby's. Sotheby's then withdrew the statue from sale.

In a latest development, both sides to the dispute have filed motions with the US District Court in Manhattan accusing the other of unethical behaviour.

On it's side, Sotheby’s is accusing the US government of intervening in their negotiations to sell the statue in a private deal which would have allowed for the return of the statue to Cambodia. Their claim is that the government blocked the deal as it wanted all the credit for the statue's return.

Meanwhile, the prosecutors have accused one of their former colleagues,  Jane A. Levine, who now works for Sotheby's, of providing them with “false and misleading information” in relation to the statue.

Sotheby's, additionally, filed further evidence disputing the ability of the US government to bring the case, and asked the judge to defer the further exchange of discovery until the court has ruled on on its motion to dismiss the case.

The court has set the next hearing for 14 October.