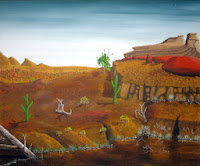 As reported here, earlier this year a lawsuit was filed in the US against Scottish artist Peter Doig by one Robert Fletcher, who claimed that Doig had given him a painting more than thirty years earlier, when he was known as Peter 'Doige'. Fletcher had filed the suit after Doig had refused to acknowledge the painting in question as his work.


Lawyers for Doig have now filed papers alleging that it is simply a case of mistaken identity. The National Post reports:


“The painting over which they have brought suit was not painted by Peter Doig,” one of the artist’s attorneys, Chicago lawyer Shuyash Agrawal, stated bluntly in an Aug. 28 submission to an Illinois district court.

And in the same submission, Agrawal delivered a potentially devastating blow to Fletcher’s claims: “We have now found the person who actually painted the work at issue.” Doig’s lawyer identified an Alberta man named Peter Doige — who had died in February 2012 and was memorialized on the website of an Alberta labour union — as the work’s true artist.

“A simple Google search for ‘Peter Doige’ revealed several Canadians with the first name of ‘Peter’ and a family name of ‘Doige,’” stated Agrawal. “Among these Google results was an ‘in memoriam’ listing on the website of the Alberta Regional Council of Carpenters and Allied Workers (ARC) regarding the passing of one of its members, Peter Doige in February 2012.”

Furthermore, Doig's lawyers say that they have found Peter Doige's sister, Marilyn Doige Bovard, who has signed an affidavit stating that her brother was an artist and, more importantly, that he had served time at Thunder Bay Correctional Facilities, where Fletcher claimed to have met the artist of his painting.

Nevertheless, it seems that Fletcher is still convinced the work is by Peter Doig. His quest for the real truth continues, for now.