Last week saw the latest step in an art dispute between Cambodia and Sotheby's.

The dispute concerns a 10th century sandstone statue. Sotheby's listed the statue for auction on 24 March 2011. 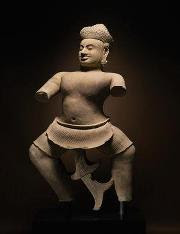 The press release noted that the auction of Indian & Southeast Asian Works would "be led by a spectacular 10th century Khmer Koh Ker period Athlete from a European private collection (est. $2/3 million). Acquired by the original owner over 40 years ago, the figure is mate to the Koh Ker athlete at the Norton Simon Museum in Pasadena that is almost identical in posture and physical appearance." Indeed, it is reported that in 2007, archaeologists were able to match the statue to its pedestal at a temple site in Koh Ker, a temple complex 60 miles northeast of the more well-known Angkor Wat.

At the last minute, however, the statue was removed from the auction following a claim from the Cambodian government that it had been illegally removed from Cambodia during the reign of the Khmer Rouge and should be returned to the country. Subsequently, following a request from Cambodia, US federal prosecutors filed a forfeiture claim on Cambodia's behalf. Then, in June of this year, Sotheby’s filed an unsuccessful motion to dismiss the claim on the grounds that there was no evidence that the statue had been stolen from Cambodia.

Most recently, on 21 August 2012, evidence was filed that accused Sotheby’s of knowing that the sculpture had been stolen from Cambodia when it put the work up for auction in March 2011. In this respect, the New York Times reports that:


"In their new filing, the prosecutors included statements from two heritage law experts who said that, under Cambodian and British law, the statue should be treated as stolen property.

One expert, Matthew Rendall, said the statue is covered under Cambodian statutes, royal orders and decrees dating to the early 1900s that declare such items to be the “exclusive” and “immovable” property of the government. Mr. Rendall noted five occasions between 1985 and 1997 when Sotheby’s returned sculptures to Cambodia after claims they had been looted sometime after 1970.

Sotheby’s says the sculpture could have been spirited away any time during its thousand-year history and was bought in good faith by the husband of its current owner in 1975 from a London dealer.

Experts cited by the United States and Cambodian governments insist the statue was removed more recently. The say it was too remotely located and too heavy – more than 600 pounds — to have been carried off until adequate roads were built into the region sometime after 1960."

Disputes over ownership of looted artworks are not new. However, the decisions do go either way. It remains to be seen whether the statue will be returned to Cambodia. If it can be shown that Sotheby's knew that the statue was stolen, there is a good chance that the US attorney's claim will be successful. But, it is unlikely to be very easy to prove Sotheby's knowledge. Perhaps a better standard, in any case, is whether Sotheby's ought to have known. As one of the world's largest art auctioneers, it is difficult to believe that Sotheby's did not question the origin of the statue when it was offered to them for sale.