It appears that Sotheby's London sold a piece of art at auction at the end of June for over £180,000, despite having been informed by the Art Loss Register (ALR) that it was stolen. 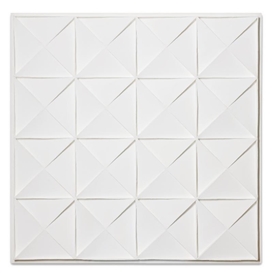 The piece by Jan Schoonhoven, R69-32 (1969), was originally stolen from the Bommel van Dam museum in March this year (along with two other Schoonhoven works and a piece by Tomas Rajlich). The work was reportedly simply turned 90 degrees, and its name was slightly altered. This was apparently all that was needed to fool everyone...

Upon discovering that the piece was up for auction, the ALR, who had been alerted when the work was stolen, contacted Sotheby's and told them that it corresponded to a Schoonhoven relief in their database. Sotheby's response was that as the title of the work did not correspond to the title in the ALR database. Therefore, they proceeded to sell the piece at auction on 27 June to two art galleries who bought it together - the Mayor Gallery in London and the Borzo in Amsterdam.

It is reported that it was only when Paul van Rosmalen from the Borzo, who had been away when the work was purchased, became aware of the acquisition made in his absence that questions were raised. An expert on Schoonhoven, he found it strange that the work had been put up for sale and asked for more details from his London colleagues. Van Rosmalen said that, on review of the photos they sent him, it was very clear that the title of the work had been modified (from R69-32 to R69-39). The sale was then immediately annulled and an enquiry opened.

The whole affair, however, only became public last week, when it was reported that a man entered a police station in Amsterdam in possession of the two other Schoonhoven reliefs stolen at the same time. On questioning, he claimed to have bought the three works in good faith...for €100...and admitted selling one through Sotheby's.

But all is well that ends well...almost. The two works which were turned into the Dutch police have been returned to the Bommel van Dam museum, although the auctioned work is apparently still in London. Unfortunately the piece by Tomas Rajlich is still missing.