Art as a crime deterrent: the Greens End experiment 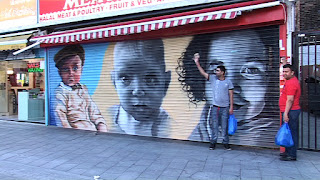 
"A host of conventional measures have been tried to control anti-social behaviour - CCTV, community policing, court orders, and tougher sentencing - but could paintings of babies and other offbeat techniques help?

A parade of shops in south-east London is the site for an experiment.

As evening draws in, the shop shutters along Greens End, a street in Woolwich, come down, revealing a gallery of portraits of local babies. They were painted by a collective of graffiti artists, who worked from family photos sent in by people living close by. The Greens End shops were badly damaged by looters in the riots of summer 2011. The mobile phone shop belonging to Zaffar Awan was among those attacked. ... Awan is delighted with the face of Max - the little boy, dressed in blue, whose smile now adorns his shop front outside business hours.

"It's been here about three weeks now," he says, "Most passers-by who see him smile. I wish we could keep the shutters down and open the shop at the same time. That would be ideal."

Tara Austin, of Ogilvy and Mather advertising agency, which paid for and initiated the scheme, points to a series of research papers, published as long ago as the 1940s, into the effect that seeing an image of a baby has on an adult stranger: "The evidence suggests that babies' faces, the round cheeks and the big eyes, promote a caring response in human beings," she says. ... ".

This blogger hopes that the interests of the children portrayed are being adequately taken care of, since at that age they are unable to fend for themselves in terms of privacy and exploitation of their image in a manner that might prove embarrassing in their later lives.
Posted by Jeremy at 19:17:00

Email ThisBlogThis!Share to TwitterShare to FacebookShare to Pinterest
Labels: art as a crime deterrent