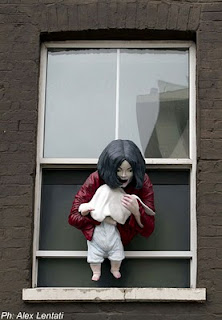 The London Evening Standard has reported that the owners of a Hackney music studio who installed "Madonna and Child", a sculpture of Michael Jackson dangling his baby son out of a window (illustrated here), have received death threats from fans. The work, by Swedish artist Maria von Köhler, is scheduled to be displayed at 209 Hackney Road, London, until 1 May. The fans maintain that the artwork, a recreation of a notorious incident when Jackson visited Berlin in 2002, is an insult to the King of Pop's memory.

There is as yet no indication that the threats are being dealt with by the police.  This blogger wonders whether being a Michael Jackson fan would be accepted as evidence of diminished responsibility in any resulting prosecution for murder.
Posted by Jeremy at 23:57:00