As reported by the IPKat here, in February 2011, the US court for the 7th Circuit rejected an artist's claim for moral rights in two wildflower gardens. 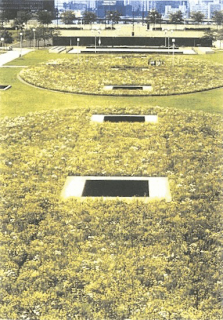 The artist, Chapman Kelley, who is renowed for his flower and landscape creations, had objected to the modification of two gardens (the “Wildflower Works”) that he had installed in Chicago’s Grant Park in 1984. Kelley had sought relief under the Visual Artists Rights Act (VARA) for infringement of his right of integrity – a right against modification that is prejudicial to the artist's honour or reputation. However, the 7th Circuit held that the gardens were not protected by copyright as they lacked the requisite authorship and fixation required to support copyright. What the Court said was:

"The real impediment to copyright here is not that Wildflower Works fails the test for originality (understood as “not copied” and “possessing some creativity”) but that a living garden lacks the kind of authorship and stable fixation normally required to support copyright...A living garden like Wildflower Works is neither “authored” nor “fixed” in the senses required for copyright...

Simply put, gardens are planted and cultivated, not authored. A garden’s constituent elements are alive and inherently changeable, not fixed. Most of what we see and experience in a garden—the colors, shapes, textures, and scents of the plants—originates in nature, not in the mind of the gardener. At any given moment in time, a garden owes most of its form and appearance to natural forces, though the gardener who plants and tends it obviously assists. All this is true of Wildflower Works, even though it was designed and planted by an artist.

Of course, a human “author”—whether an artist, a professional landscape designer, or an amateur backyard gardener—determines the initial arrangement of the plants in a garden. This is not the kind of authorship required for copyright. To the extent that seeds or seedlings can be considered a “medium of expression,” they originate in nature, and natural forces—not the intellect of the gardener—determine their form, growth, and appearance. Moreover, a garden is simply too changeable to satisfy the primary purpose of fixation; its appearance is too inherently variable to supply a baseline for determining questions of copyright creation and infringement. If a garden can qualify as a “work of authorship” sufficiently “embodied in a copy,” at what point has fixation occurred? When the garden is newly planted? When its first blossoms appear? When it is in full bloom? How—and at what point in time—is a court to determine whether infringing copying has occurred?

In contrast, when a landscape designer conceives of a plan for a garden and puts it in writing—records it in text, diagrams, or drawings on paper or on a digital-storage device—we can say that his intangible intellectual property has been embodied in a fixed and tangible “copy.”This writing is a sufficiently permanent and stable copy of the designer’s intellectual expression and is vulnerable to infringing copying, giving rise to the designer’s right to claim copyright. The same cannot be said of a garden, which is not a fixed copy of the gardener’s intellectual property. Although the planting material is tangible and can be perceived for more than a transitory duration, it is not stable or permanent enough to be called “fixed.” Seeds and plants in a garden are naturally in a state of perpetual change; they germinate, grow, bloom, become dormant, and eventually die. This life cycle moves gradually, over days, weeks, and season to season, but the real barrier to copyright here is not temporal but essential. The essence of a garden is its vitality, not its fixedness. It may endure from season to season, but its nature is one of dynamic change."

Regardless of the right or wrongfulness of the court's reasoning, the effect was the same - the gardens were not works subject to copyright and, as such, moral rights could not be claimed.

This was not the end of the story, however, because on 15 March 2011, Kelley's lawyers filed a petition for a rehearing en banc. What this means, for the non-US lawyers among us, is that they asked that all the judges of the 7th Circuit reconsider the original decision, which was made by a panel of only three of the 7th Circuit judges. There is no automatic right to a rehearing en banc. The parties may request it, but a majority of the active circuit judges have to agree, and, where the case concerns a matter of public importance, often they will.

Unfortunately for Kelley, on 19 April 2011 , the three judges who issued the ruling in February signed off on a court order which stated:

In other words, the three judges who made the original ruling unsurprisingly voted against the case being reheard and, since none of the 7th Circuit judges requested that the judges vote as to whether the case should be reheard, the judges didn’t even bother to vote on the petition. A very sorry state of affairs.

So is this the end? Well, according to the Council for Artists' Rights, Kelley may be prepared to take his fight all the way to the US Supreme Court. We will have to wait and see whether he does.
Read the full decision of the 7th Circuit here
Posted by Simone at 17:38:00