As reported here, it was not long ago that political battles were threatening artworks in Egypt. Now, there is a legal battle over a piece of Egyptian art in the US.

The artwork is an Egyptian mummy mask known as the Mask of Ka-Nefer-Nefer, said to be approximately 3,200 years old, which was discovered in about 1952. 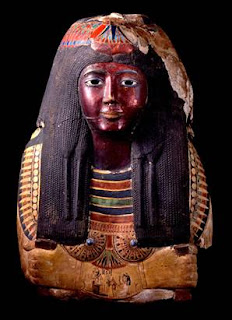 Presently the mask is the possession of The Saint Louis Art Museum which has recently filed a complaint in the US District Court for the Eastern District of Missouri in Saint Louis. The Museum seeks declaratory relief that the US government (and in particular the US Department of Homeland Security) is not entitled to seize the mask from it.

The Complaint sets out the background as follows.

Subsequently, towards the end of 1997, the Museum initiated an investigation into the provenance of the mask as it intended to purchase the mask from Phoenix. At this time, the Museum made multiple enquiries into the mask's provenance to ensure that it was not stolen. These enquires were made of a number of individuals and entities, including: the director of the Museum of Egyptian Antiquities in Cairo, The Art Loss Register (as previously discussed here on this blog), INTERPOL, the International Federation of Art Research ad the Missouri Highway Panel (as an INTERPOL constituency). None of these, or other, background checks, established that the mask was stolen. Accordingly, in April 1998, the Museum purchased the mask from Phoenix.

However, from the end of 2005, a number of communications were sent to the US government alleging that the mask was stolen and asking the government to take action to return the mask to Egypt.

Eventually, at the end of 2010, the Museum was contacted by the US Attorney's Office for the Eastern District of Missouri in St Louis to attend a meeting regarding the mask. At that meeting, in January 2011, the Assistant US Attorneys informed the Museum of their intention to seize and forfeit the mask under the Tariff Act, 19 USC § 1595a – on the ground that it is reasonable to believe that the mask was “stolen, smuggled, or clandestinely imported or introduced” into the US.

The Museum claims in the alternative that

As we have seen previously on this blog, Statute of Limitations arguments have proved very successful in the past in the US in relation to recovery of art works. We will have to wait and see whether it is once more in this case.