The Egyptian Museum houses a variety of priceless works of art, including the contents of the tomb of King Tutankhamen. The gold death mask is one of the most spectacular and famous pieces.

It is unclear how many of the works are in the museum at the present time as reports suggest that a large number of treasures are currently on tour around the States, nevertheless, the quality and historical significance of the art stored in the museum cannot be underestimated.

Unfortunately, the museum is practically next door to the National Democratic Party building which has been the focus of a lot of the fighting in Cairo.

There were a variety of both alarming and reassuring reports yesterday. The Guardian suggested that the fire at the NDP headquarters might spread to the Museum. Meanwhile, Euronews reported that thousands of protestors had formed a human chain around the Museum to prevent its being looted.

Reuters finally reported that the army had secured the Museum late last night. It appears to be safe for now, and more importantly, the protestors appear to be extremely conscious of avoiding the fate of the Iraq museum. We can only hope that this respect for the past continues.

Reports are still a little confused but it appears that at least two mummies were destroyed during the anti-government protests before the army moved in to secure the museum. There have also been images of broken glass display cases and artefacts on blogs such as HyperAllergic.

According to Al Jazeera, Zahi Hawass, the Secretary General of the Supreme Council of Antiquities, said looters ripped the heads off two mummies and cleared out the museum gift shop. However, in large part thanks to the actions of Egyptian citizens forming a protective human shield around the museum, the damage has been fairly limited and there have been no reports of any successful theft from the museum. 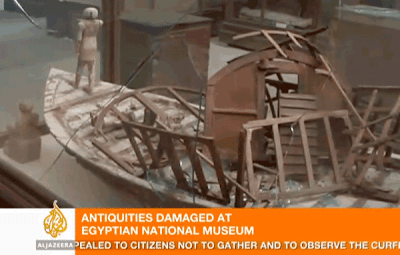 Mr Hawass confirmed that the museum's prized King Tutankhamun exhibit, which includes the boy pharaoh's gold death mask, had not been damaged and was safe. However, he also noted that the museum's contents could still damaged by the potential collapse of a neighbouring building that was gutted by fire.

Ironically, a couple of weeks ago Zahi Hawass, Egypt's Vice Minister of Culture, grabbed headlines around the world after he claimed that the Central Park Conservancy and Mayor of New York City have not made adequate efforts to conserve Cleopatra's Needle.

Sadly, there are now reports of looting at the Egyptian Museum. Somewhat depressingly the former director of the Egyptian Museum, Wafaa el-Saddik (pictured below) has said, in a widely reported interview for Zeit Online (in German only), that the individuals responsible for the museum’s looting included its guards. 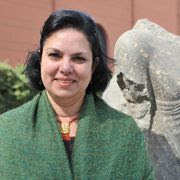 On the bright side, it looks as though the fire at headquarters has now been extinguished and no longer poses a threat to the museum.

Other parts of Egypt have not been so lucky. The Memphis Museum has apparently been completely ransacked.

There are now reports from Reuters of Molotov cocktails being thrown in the vicinity of the museum some of which landed in the Museum's gardens. It does not appear that the Museum itself has been hit but the risk of fire spreading to the museum increased as a result. Reuters has reported that the army has moved in to extinguish the flames and prevent the fire spreading.
Posted by Rosie Burbidge at 10:02:00