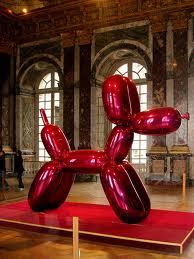 As previously posted, in December 2010, Koons instructed his lawyers to write a cease and desist letter to Park Life, a San Francisco gallery selling balloon dog book ends, and imm Living, their Canadian distributor. Park Life were fairly bullish in their response both on their website and via their lawyer – who launched a declaratory action against Koons requesting a jury trial and a judgment that the Park Life book ends do not infringe Koons’ sculptures. The confident response included an entire section dedicated to a history of balloon animal making and was at times faintly hilarious “as any clown can attest, no one owns the idea of making a balloon dog”. There were even rumours of the lawyer collecting a range of expert witnesses who could demonstrate their balloon modelling skills in court.

Under the settlement, Koons is reported to have agreed not to pursue any claims against Park Life or imm Living so long as Koons’ name is not used to sell their goods (something neither business was doing before Koons made the connection in December). The irony is that Koons himself made the connection with his letter before action and now Park Life’s balloon dog bookends are reportedly “flying off the shelves”.