Via a recent Tweet this blogger found himself browsing through the frames of a PowerPoint presentation by his friend Gino van Roeyen (Banning), an engaging and enthusiastic Dutch IP lawyer with whom one's time is generally spent both productively and enjoyably.  By way of introduction to the lecture for which these frames were prepared, Gino explains:


"Although art is generally considered to be the territory of absolute freedom in which creativity should thrive optimal, it can also be the arena of virulent copyright battles. As copyright in a work of art protects against publication and reproduction of that work (including reproductions that cannot be regarded original themselves) without permission of the copyright owner, unauthorized occupation of such a work might be regarded as a declaration of war against the copyright owner. It might ask for forms of retaliation, varying from cease and desist letters to litigation in court.

Of course, the art of retaliation may depend on the gravity of the infringement. Straightforward pirates (copycats) might risk severe measures of retaliation, like destruction of counterfeit works of art and penalties. But what to do with works of art that are not copies of the original, being in one way or another ‘linked’ to the original?  So called appropriation art cultivates what already exists into art.  This might also involve works of art which are protected by copyright, but also other tangible objects that can be the object of a copyright (like for example the design of a simple household issue like a towel). 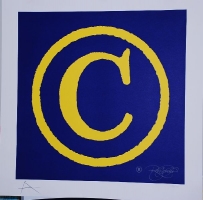 In this lecture this phenomenon will be examined and explained closely by means of several examples of copyright battles in the arts throughout the years. Since Rob Scholte -- who can be regarded as an acclaimed and famous supporter of ‘appropriation’ in art -- will be the keynote speaker at the conference, the lecture will also focus on his work, like for example his famous © work, in which Scholte appropriated the © sign, a sign which can be used freely to denote that copyright is claimed for a work. Paradoxically by inserting the © into his own work – or should we say by reconstructing the © into a work of art – Scholte created a work which is protected by copyright'".