Dammed if you do, damned if you don't: are sculptors worth more than scalers?

"Hoover Dam artist wins $1.3 million in copyright lawsuit" is the striking headline of an article by Henry Brean in the Las Vegas Review Journal, here. According to the author:


"An artist has won almost $1.35 million in a lawsuit over a sculpture commemorating workers who were paid $5 per day to risk their lives during the construction of Hoover Dam. A jury in Las Vegas federal court ruled last month in favor of artist Steven Liguori, creator of the bronze statue known as the “High Scaler” at Hoover Dam. 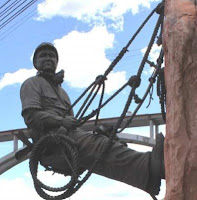 In 2011, Liguori sued Bert Hansen, longtime owner and operator of the Hoover Dam Snacketeria and the High Scaler Cafe at the dam, after the artist said he was cheated out of royalty payments and his work was used without permission for merchandise and marketing. According to the lawsuit, Hansen commissioned Liguori to create “High Scaler” for a $166,000 fee and a share of the proceeds from merchandise based on the sculpture as well as the artist’s other dam-related creations.

U.S. District Judge George Foley ordered Hansen to pay Liguori $1.2 million for breaching their agreement and $150,000 in other damages.

The sculpture at the center of the legal dispute is modeled on a photograph of a high scaler, a special breed of Hoover Dam laborer willing to clear loose rock from the walls of Black Canyon while dangling from ropes tied to clifftop eye bolts.

“They were the celebrity laborers on the dam,” said Dennis McBride, director of the Nevada State Museum at the Springs Preserve and a leading Hoover Dam historian. “They’d be sitting in their bosun’s chairs, and over the side they went.”

...  The Las Vegas law firm Hutchison &Steffen, which represented Liguori, announced the final judgment in the lawsuit Thursday. “A jury of his peers found that he just wasn’t treated fairly,” Hutchison &Steffen partner Todd Moody said of Liguori in a written statement. “Not only did they breach the contract they had with him, they also infringed on the copyright he had. And to be awarded the highest statutory amount was kind of the icing on the cake.” ...".

Damages for breach of contract and copyright infringement are nothing new and, by the standards of litigation in the United States today -- especially when compared with the massive damages awarded by juries for patent infringement in the same jurisdiction -- $1,3 million seems almost trivial. However, the juxtaposition of that sum against "$ 5 an hour" makes it sound unfairly large.  There is also the implication that it's somehow unfair for an artist to gain more financially from his art than is paid to laborers who risk life and limb while dangling from ropes, though the truth of the matter is that the supply of monumental sculptors is far more limited than the availability of high scalers, a factor that is inevitably going to be reflected in the contract terms offered to Liguori in the first place.
Posted by Jeremy at 17:30:00